Turkish officials have issued arrest warrants for 101 people suspected of having ties to Kurdish militants. A group of lawyers was detained by security forces during the ensuing raid.

Out of 72 people detained on Friday, 24 are lawyers, Turkish media reported.

Police operations continue in the Istanbul, Izmir, Diyarbakir and Adiyaman provinces, as authorities are looking for the remaining suspects. Two unlicensed guns and ammunition were seized during the raids.

The suspects were said to have been tied to the Democratic Society Congress (DTK), which Turkish media called the “legislative body” of the banned militant group, the Kurdistan Workers’ Party (PKK). Founded in 2007, the DTK aims to promote “democratic confederalism” and “democratic autonomy for all peoples of Turkey,” according to its website.

The Diyarbakir Bar Associations confirmed that at least 17 of its members were detained. Its chairman, Cihan Aydin, said that they were targeted because their names were allegedly mentioned in DTK documents.

The association slammed the arrests as “illegal” and demanded the lawyers be released immediately.

Over the years, Turkey has conducted military and police operations against the PKK, which is primarily active in the eastern part of the country. 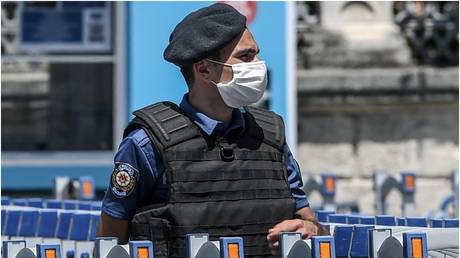 WHO panel advises against Gilead’s...