Turkey says it will hold naval drills near northern Cyprus, amid a simmering territorial dispute with Greece. The announcement came as President Recep Tayyip Erdogan defended Ankara’s position in a call with his US counterpart.

The live-fire exercises will take place on September 1-2, according to an advisory released by the Turkish navy on Thursday. The naval maneuvers will occur off the coast of Iskenderun, northeast of Cyprus.

The announcement coincided with a telephone conversation between Erdogan and US President Donald Trump, during which the pair discussed regional developments. According to a statement released by Ankara, Erdogan told Trump that “it is not Turkey that has created instability in the eastern Mediterranean,” adding that his nation “favors dialogue and de-escalation of tensions.”

A dispute with Greece over control of Eastern Mediterranean waters escalated after Turkey sent a seismic survey vessel to the region earlier this month. Athens denounced the move as unlawful. Both countries have claimed ownership over gas deposits in waters off the shores of Crete and Cyprus.

Tensions increased after France said it would join Cyprus, Greece and Italy in three-day naval and air exercises in the Eastern Mediterranean.

On Wednesday, Erdogan vowed that Turkey would “make no concessions” and warned Greece to “avoid wrongs that will be the path to ruin.” Athens in turn made it clear that it would not back down, stating that it was abandoning decades of “passive” foreign policy. 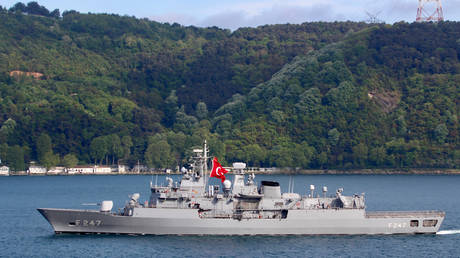