A Tunisian court has said it is investigating three of the country’s political parties, including Ennahda and Heart of Tunisia, over allegations they received foreign funds during the 2019 election campaign.

On Wednesday, a spokesman for the Tunisian judiciary told the Tunis Africa News Agency that investigations were launched in the first two weeks of July into allegations of political wrongdoing.

The spokesman added that the inquiries began before President Kais Saied decided to dismiss the prime minister and freeze parliament. Ennahda and Heart of Tunisia have said Saied’s move is tantamount to “revolution.”

The investigation concerns three political parties – the country’s two largest, Ennahda and Heart of Tunisia, and Aish Tounsi – over  allegations that they received foreign funding during the 2019 election.

None of the parties were available for comment, according to Reuters.Tunisia is currently facing one of its toughest political challenges after Saied dismissed the PM and froze the country’s parliament for 30 days after an emergency meeting at his palace on Sunday night.

Ennahda has since called for calm after previously inviting its supporters onto the streets to protest the president’s move. While the situation has not escalated throughout the week, the army remains stationed around the parliament building to prevent further demonstrations.

Also on Wednesday, French Foreign Minister Jean-Yves Le Drian told his Tunisian counterpart, Othman Jerandi, that it was of the utmost importance that Tunisia quickly names a new prime minister, according to a foreign ministry statement. 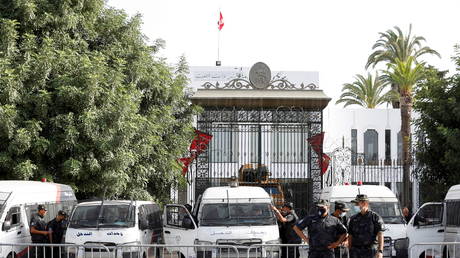