Tunisian President Kais Saied, who seized control of the government last weekend, said that billions of dollars had been stolen from the country and offered businessmen an option to return the money if they wanted to avoid prison.

During his meeting with the head of the UTICA business union, Samir Majoul, on Wednesday, Saied blamed 460 individuals for snatching 13.5 billion dinars (around $4.8 billion) from Tunisia.

He promised a crackdown on corruption, but, at the same time, insisted he had “no intention to harm or abuse” Tunisian entrepreneurs.

“I propose a penal reconciliation with businessmen involved in looting the people’s money and tax evasion in exchange for their commitment to projects … instead of being prosecuted and imprisoned,” the president said in video footage of the meeting distributed by his office.

The businessmen on Saied’s list will be ranked in accordance with the amount of money they owe the country. Over the next ten years, they will be asked to fund the construction of schools, hospitals, and other socially important infrastructure, according to the proposal.

The head of state also urged traders to be “patriotic” and to reduce their prices, promising punishment for those caught speculating or hoarding goods.

Saied, who became president in 2019 after campaigning against corruption and the entrenchment of the political elite, used emergency powers to dismiss the government and freeze the parliament late on Sunday. He insisted the harsh move was necessary to “save” the country amid protests caused by people’s anger over its “dysfunctional” political system and crumbling healthcare provision.

His opponents have labeled the consolidation of power in Saied’s hands as a “coup” and a pushback against the achievements made by Tunisia during the Arab Spring uprising in 2014, and urged their supporters to take to the streets. However, the president has warned that the military would “respond with bullets” if the situation got out of hand. 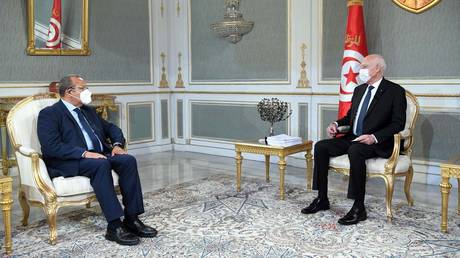 ‘Independent’ Mexico has every rig...