An earthquake measuring 7.4-magnitude has hit southern Mexico, killing at least one person and triggering a tsunami warning for Pacific coastal areas near the epicenter.

The country’s seismological service issued the tsunami warning for the central Oaxaca region, recommending residents move away from the coastal area. Videos posted online from the affected area showed the ocean water receding from the shoreline.

The Pacific Tsunami Warning Center said in one bulletin that tsunami waves could reach up to three meters above tide level and affect the area within 1,000 kilometers (620 miles) of the quake’s strike site, including parts of Colombia, Honduras, Guatemala and El Salvador. Mexican officials reported an ongoing tsunami off the Oaxaca coast, with sea levels rising about  60 centimeters at one stretch of beach.

The tsunami warning was later stood down.

Mexico’s positioning atop an intersection of three tectonic plates makes it one of the world’s earthquake hot spots. A 7.1 earthquake that struck the country in 2017 killed 370 people and injured more than 6,000. 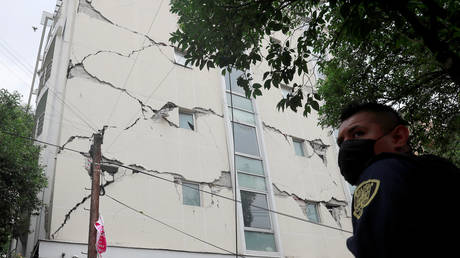