Trump would “only meet with Maduro to discuss one thing: a peaceful exit from power!” the president tweeted on Monday, walking back comments he made in an Axios interview, where he hinted he would “maybe think about” meeting with the Venezuelan leader.

“Unlike the radical left, I will ALWAYS stand against socialism and with the people of Venezuela,” Trump added, proclaiming his opposition to the “oppressive Maduro regime.”

Unlike the radical left, I will ALWAYS stand against socialism and with the people of Venezuela. My Admin has always stood on the side of FREEDOM and LIBERTY and against the oppressive Maduro regime! I would only meet with Maduro to discuss one thing: a peaceful exit from power!

The outburst came in stark contrast to the president’s tentative statements in support of a rapprochement with the Venezuelan leader, published on Sunday. “I would maybe think about that,” Trump told Axios, acknowledging “Maduro would like to meet” and that he himself is “rarely opposed to meetings” – even though he had turned his Venezuelan counterpart down.

Trump’s about-face was likely motivated by a Twitter jab from Democratic presidential candidate Joe Biden, who framed the effort to re-evaluate Washington’s failed policy in the country as “[admiring] thugs and dictators like Nicolas Maduro.” Biden also promised to “stand with the Venezuelan people and for democracy.”

Trump talks tough on Venezuela, but admires thugs and dictators like Nicolas Maduro.

As President, I will stand with the Venezuelan people and for democracy. https://t.co/eUt28UxyXS

The Democrat’s dig at Trump and Maduro notably didn’t mention US-backed opposition leader Juan Guaido – whom Washington still recognizes as Venezuela’s rightful president – by name. Trump admitted in his interview with Axios that Guaido was not living up to expectations, while his former National Security Advisor John Bolton claimed in his controversial tell-all book that Trump found Guaido “weak” and even compared him to failed Democratic presidential candidate Beto O’Rourke. Despite Guaido’s presence at Trump’s 2020 State of the Union address, the politician’s popularity in Washington appears to be on the decline.

Trump and Biden had both previously equated support for Guaido with “democracy” in Venezuela, even though the former National Assembly leader and self-styled interim president was never elected by the Venezuelan people, scarcely a fifth of whom even knew who he was when the Trump administration anointed him their leader in 2019. As of last month, he no longer even leads the National Assembly – though the EU has challenged his replacement, digging itself further into an alternate-reality hole with regard to its Venezuela policy.

However, both Trump and Biden are competing to win the swing state of Florida, home to many Cuban and Venezuelan expats for whom even a hint of tolerance for socialism is anathema – so attacks on Maduro are a must.

Earlier this month, Venezuelan Foreign Minister Jorge Arreaza accused France of hiding Guaido in its embassy in Caracas and demanded the “fugitive from justice” be handed over. Guaido was stripped of his legal immunity last year after several failed coup attempts, and has sought to distance himself from a failed mercenary raid that allegedly sought to kidnap Maduro and transport him to the US, where he faces narco-trafficking charges. Caracas has dismissed the allegations as the hypocritical act of a terrorist state, pointing to the US’ record as the “world’s terrorists” behind many destructive foreign interventions. 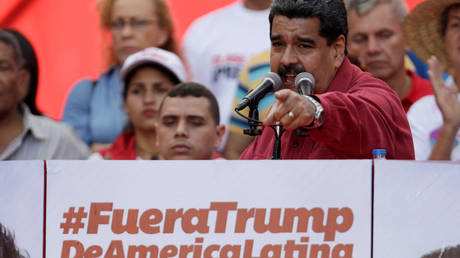