Trump says THIRD meeting with Kim Jong-un would ‘probably’ be helpful, but Pyongyang is less enthusiastic

Trump says THIRD meeting with Kim Jong-un would ‘probably’ be helpful, but Pyongyang is less enthusiastic

Donald Trump, who claims to have established a personal rapport with North Korean leader Kim Jong-un, has floated the idea of holding another face-to-face meeting. Pyongyang, however, said talking to the US is not on its agenda.

“I understand they want to meet, and we would certainly do that,” US President Donald Trump told Gray Television’s Greta Van Susteren. He went on to say he would hold a meeting if he thought it was going to be “helpful.”

Asked by Susteren if he believed it would indeed be helpful, Trump said it “probably” would, suggesting his personal relationship with his North Korean counterpart would make a difference.

I have a very good relationship with him, [so it] probably would be [helpful].

Speculation has mounted in recent days that Trump may meet with Kim before the year’s end.

Despite Trump’s claim that the North Koreans want to meet again, however, officials in Pyongyang seem to have been sending different messages, sounding decidedly unenthusiastic about resuming the talks just a day earlier.

“Explicitly speaking once again, we have no intention to sit face to face with [the] US,” said Kwon Jong Gun, who heads the Foreign Ministry’s Department of US Affairs, as reported by the state-run KCNA network.

The diplomat also predicted that inter-Korean relations “are bound to go further bankrupt as they only talk nonsense, unaware of the time.” The resolute refusal comes weeks after Pyongyang dismantled what it called a “useless” North-South liaison office in the border town of Kaesong and vowed to cut off all communications channels with its capitalist neighbor.

Trump and Kim created high hopes for a major thaw in US-North Korea relations when they met for the first time in Singapore roughly two years ago. Their second meeting in Vietnam in 2019 further raised expectations of improved ties.

It ended abruptly, however, with the two leaders quitting the closely watched meeting before the time came to sign a mutual declaration. Reports suggested the US pressed North Korea into giving up its nuclear weapons before discussing any possibility of lifting sweeping economic sanctions – a standpoint Pyongyang saw as an affront to its security.

Relations between Washington and Pyongyang frayed further shortly afterwards as the North resumed missile launches, at the same time blaming the US for stalling the talks and not playing fair.

South Korea’s President Moon Jae-in, one of the most vocal advocates for the US mending ties with the North, said last week that he would facilitate another summit before the American presidential elections in November.

Stephen Biegun, the US president’s top envoy on North Korea, told reporters on Wednesday that any Pyongyang counterpart sent to pave the way for such talks “will find us ready at that very moment” — but he said any meeting before November would be unlikely due to Covid-19 restrictions. 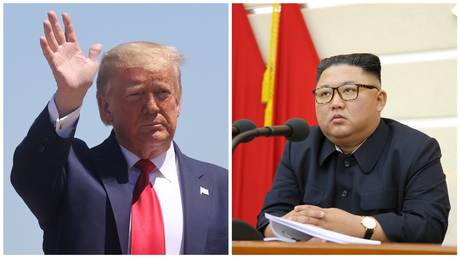