‘Trump probably won’t dare take part’: Tehran doubts if Iran summit proposed by Putin will yield results, because of US

‘Trump probably won’t dare take part’: Tehran doubts if Iran summit proposed by Putin will yield results, because of US

Tehran is unsure if the online summit proposed by Vladimir Putin to defuse mounting tensions around Iran and the UN arms embargo will have any effect, thanks to America’s stance and the expected absence of Donald Trump.

Russian President Vladimir Putin last week proposed an online gathering, featuring Iran, Germany and the five permanent members of the UN Security Council. Defusing tensions around Iran and making the region safer can be achieved “if our countries and the regional states combine their political will and creative energy,” said the Kremlin’s statement on the matter.

According to Tehran, that part is the hardest to achieve. “We understand the good intentions of Mr Putin to reduce tensions. However, one way or another, we doubt that such a meeting will be effective in the absence of sincerity on the part of the American government,” Iranian government spokesperson Ali Rabiei told Russian news agency RIA Novosti on Tuesday.

Probably, the US president [Donald Trump] will not dare to take part in the summit because he is convinced that he will again be isolated.

Earlier, when asked about whether he would participate in the summit, Trump replied “Probably not.” He also added that he intends to move ahead with triggering a “snapback” of all sanctions on Iran after the UN failed to extend its arms embargo there.

The simmering feud between the US and Iran escalated last week, when a US-sponsored resolution that would have extended the embargo indefinitely failed to pass the Security Council vote.

Still, Iran isn’t brushing aside the idea of an online convention. Rabiei said Tehran will approach the initiative “with full seriousness” once all parties receive an official invite, and will confirm or decline its participation in due time.

A meeting of this kind would “facilitate the emergence of reliable mechanisms in the Persian Gulf region for ensuring security and confidence building,” the Kremlin statement suggested.

If the leaders of the countries concerned fail to come to terms, “we could see the further escalation of tension and an increased risk of conflict” in the already troubled region, it warned.

The arms embargo, which is due to expire in October, was agreed under a 2015 nuclear deal between Iran and the so-called P5+1 group, consisting of permanent UNSC members Russia, China, Britain, France, and the US, plus Germany. Known as the Joint Comprehensive Plan of Action (JCPOA), the deal would have prevented Tehran from developing nuclear weapons in return for sanctions relief.

However, the Trump administration unilaterally exited the deal in 2018 and has since reimposed all the sanctions suspended under it, as well as imposing additional ones.

In a fresh round of escalation, Washington confirmed it has captured over a million barrels of Iran-originated fuel aboard four tankers bound for Venezuela. Tehran responded by revealing that the ships and their cargo were owned by Venezuela, not Iran. 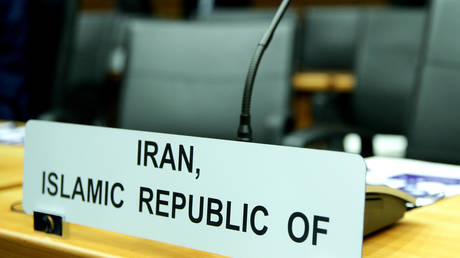 NASA may have cracked what’s behin...