US President Donald Trump said the State Department will soon attempt to trigger a “snapback” of UN sanctions on Iran, as the top American diplomat threatened consequences for Moscow and Beijing if they try to block the effort.

“Today I’m directing the Secretary of State Mike Pompeo to notify the United Nations Security Council that the United States intends to restore virtually all of the United Nations sanctions on Iran – it’s a snap back, not uncommon,” Trump told reporters during a White House press conference on Wednesday.

“My administration will not allow this Iran nuclear situation to go on,” Trump added, claiming that if he is re-elected, Tehran will immediately crawl back begging for a deal with Washington.

The Secretary of State will travel to the UN Security Council (UNSC) in New York on Thursday to begin the process to restore the penalties, the State Department said. Pompeo warned in a Fox interview earlier on Wednesday that China and Russia would be held “accountable” should they vote against the move, which he said would come in the form of a “a fully valid, enforceable UN Security Council resolution.”

Pompeo says that the US will “absolutely” impose sanctions on China and Russia if they refuse to impose the snapback sanctions on Iran which the US plans to trigger later this week, during his Fox interview.

Though Washington has long since revived all US sanctions on Iran predating the 2015 nuclear pact between Tehran and world powers, a series of UN penalties remain suspended under the terms of the deal. After failing to persuade the UNSC to extend an arms embargo on Tehran last week – set to expire in October – US officials vowed to invoke a provision of the nuclear agreement that would “snap back” the previous UN sanctions.

Both Tehran and US allies in Europe have questioned the legality of the move, given that Washington stepped out of the nuclear deal in 2018 – effectively abandoning its obligations while still hoping to invoke its powers. European parties to the agreement warn the renewed penalties could implode the deal altogether, as sanctions relief has been Tehran’s primary concern. 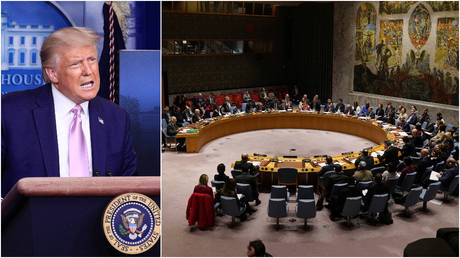