The Nobel Committee has announced it is awarding one of this year’s prizes to the three scientists involved in the discovery of the hepatitis C virus, which kills 400,000 every year according to the WHO.

On Monday, American scientists Harvey J. Alter and Charles M. Rice, plus British virologist Michael Houghton, who together discovered the hepatitis C virus, have been awarded the Nobel Prize in Physiology or Medicine. The announcement was made in Stockholm by Thomas Perlmann, the head of the Nobel Committee.

“Highly sensitive blood tests for the virus are now available and these have essentially eliminated post-transfusion hepatitis in many parts of the world” thanks to the discovery, the committee said. The trio’s findings also made it possible to rapidly develop antiviral drugs.

BREAKING NEWS:
The 2020 #NobelPrize in Physiology or Medicine has been awarded jointly to Harvey J. Alter, Michael Houghton and Charles M. Rice “for the discovery of Hepatitis C virus.” pic.twitter.com/MDHPmbiFmS

The World Health Organization estimates that there are more than 70 million cases of the blood-borne virus globally, causing 400,000 deaths each year. The disease is a major cause of liver inflammation and cancer.

Identifying the causative agent is considered key to successful interventions against the disease. The discovery of the hepatitis B virus in the 1960s by Baruch Blumberg allowed for the development of diagnostic tests and an effective vaccine. Blumberg was subsequently awarded the Nobel Prize in Physiology or Medicine in 1976.

The prize is the first of six awards due to be announced over the next seven days. 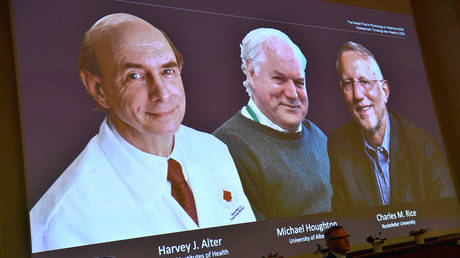