A large blaze has erupted at a power station in southwest Iran, causing brief electricity outages in the area. The incident is the latest in the string of mishaps at strategic facilities across the country.

The fire broke out on Saturday at the Zargan plant, located in the city of Ahvaz. Footage from the scene, which has been circulating online, shows a large column of black smoke coming from the facility.

A fire department official told local media that the blaze was caused by a transformer, which exploded after overheating. The fire was promptly contained by firefighters, limiting damage to the facility.

The plant fire follows a string of mysterious incidents at key facilities over the past week. On Tuesday, an explosion rocked a medical facility in northern Tehran.The blast and subsequent fire killed 13 people and left six injured. The incident was blamed on a gas leak.

On Thursday, an unspecified incident occurred at the Natanz nuclear enrichment facility, triggering a fire and causing damage to the plant. Iranian authorities say they have already determined the cause of the mishap, but will not provide further details until a “convenient time.” The incident did not cause any radioactive leaks, as nuclear materials were not present in the damaged building, officials stressed.

Another explosion occurred to the east of Tehran, near the Parchin military and weapons development facility, last Friday. The incident, which affected a storage facility outside the base, was blamed on a gas leak. 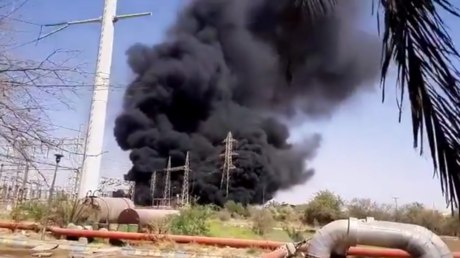 Burnt to a crisp and crushed to de...