The secretary general of the Palestine Liberation Organization’s Executive Committee, Saeb Eraket, has died after contracting coronavirus. He had previously been evacuated for treatment to Israel.

Erekat passed away due to complications from Covid-19, the PLO Executive Committee confirmed on Tuesday. Committee member Hanan Ashrawi hailed Erekat as “a Palestinian patriot” who “dedicated his life to the service of the Palestinian people and cause.”

The politician will be remembered for his “commitment to achieving peace and freedom for the Palestinian people,” Ashrawi said.

Statement by @DrHananAshrawi on behalf of the PLO Executive Committee on the passing of @ErakatSaeb: We mourn the loss of a dear colleague and a Palestinian patriot; someone who loved life and fought hard to secure a life of freedom for himself and his people. Read full Statement pic.twitter.com/4wexWsbjaN

Last month, Israel approved a request to have Erekat evacuated from his home in Jericho in the West Bank to the Hadassah Medical Center campus in West Jerusalem after his condition worsened. He was then placed on a ventilator and in a medically induced coma.

The politician was said to have been vulnerable to Covid-19 due to his age and previous medical history. Erekat survived a heart attack in 2012 and received a lung transplant in 2017.

Erekat was born in the village of Abu Dis, south of Jerusalem. He enjoyed a career in academia before entering politics in the early 1990s. Former PLO leader Yasser Arafat appointed Erekat as head of the Palestinian negotiation team with Israel after the Palestinian Authority (PA) was established in 1994.

Between 1994 and 2003, Erekat served as the first Palestinian Authority minister for local government. He also accompanied PA President Mahmoud Abbas on trips around the world.

According to Israeli media, Erekat considered himself a leading candidate to succeed Abbas until his health began to deteriorate. An obituary in the Jerusalem Post noted that Erekat was “one of the few local Palestinian leaders who never spent a day in Israeli prison for terror-related offenses.” 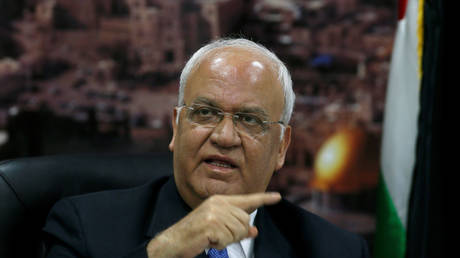