Germany’s Federal Constitutional Court has rejected urgent appeals to temporarily suspend the country’s night-time Covid-19 curfews, although it has stressed that its ruling does not mean the measures are legally sound.

The First Senate of the Karlsruhe-based court said in a statement on Wednesday that the curfews serve a “fundamentally legitimate purpose.”

However, it also acknowledged the disagreement among experts about whether curfews are an effective way to curb the spread of infection.

“The fact that the Federal Council has not approved the law does not make the law obviously formally unconstitutional,” the court’s statement read.

The ruling comes after German MPs passed a law in April giving Chancellor Angela Merkel’s government new powers to tackle the pandemic, including the ability to impose curfews between 10pm and 5am in regions with surging infection rates.

Under the law, Berlin can use “emergency brake” powers to bring in health measures in areas where the seven-day incidence virus incidence rate is above 100 cases per 100,000 people.

Previously, Germany’s 16 states had governed their own coronavirus restrictions, but agreed to new nationwide powers earlier this year.

As MPs voted on the new bill, a huge protest against the legislation last month saw as many as 8,000 people march near the parliament in Berlin, with some 2,200 police officers dispatched to control the crowds.

According to German magazine Der Spiegel, some 315 constitutional complaints against the law had been filed with the court by Tuesday, including by all parliamentary group members of the FDP opposition party.

The complaints remain pending, and a date when they will be heard by the court has not yet been set. 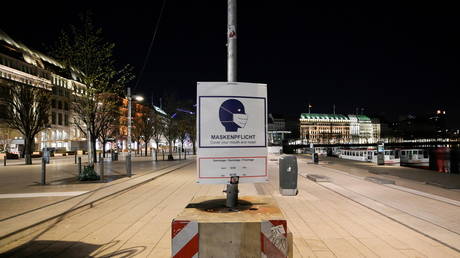