A group of activists has marched through the streets of Vienna, protesting against terrorism and racism. The Austrian capital suffered a deadly jihadist attack last week.

The demonstrators carried Antifa flags and banners saying “Together against terrorism” and “Together against ISIS” as they marched from the city’s opera building to the scene of the attack that occurred on November 2. They decried both Islamist extremism and hatred towards religious and ethnic minorities.

“In my opinion, religions are peaceful, even though some people spread hate. It’s important to be reminded that we should act in solidarity,” a student attending the march told Russia’s Ruptly video news agency.

“In Vienna, and in many other parts of the world, we have got a big problem with very right-wing politics at the moment. So, there have been fascist marches in Vienna some months ago,” Axel Magnus, a trade union activist, said.

Last week, a gunman killed four people and wounded 23 more in the city center before being shot dead by police. The perpetrator was a 20-year-old Austrian-born man of Albanian origin who was an Islamic State (IS, formerly ISIS) sympathizer. Islamic State later claimed responsibility for the attack. The country’s leading Muslim non-governmental organization, the Islamic Religious Authority of Austria, condemned the shooting.

Following the attack, a group of right-wing activists held a torch-lit protest in Vienna, urging the authorities to take more action against Islamist radicals and to tighten migration laws. They were met with counter-protesters, who labeled them “Nazis.” 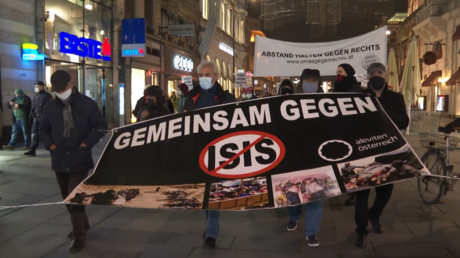