TikTok goes down, prompting speculation that it’s been banned

TikTok goes down, prompting speculation that it’s been banned

Users in North America and Europe reported that the popular video-sharing social network TikTok went down after 2pm ET, according to Downdetector and multiple complaints on Twitter.

More than 17,000 users reported problems with the popular video sharing app, according to Downdetector, an internet outage monitoring website. People were complaining about being unable to upload clips to TikTok, and that the likes on the videos were reset to zero.

me running to twitter to see if anyone’s tik tok is working #tiktokdown pic.twitter.com/Mvu8Ao8o0f

The Chinese app has been in the crosshairs of US authorities for a while, which has prompted speculation that the outage might be a sign of a ban.

me yesterday: “whatever i doubt they’ll actually ever really ban tik tok”

me going on today and seeing every single video has 0 likes and views: #tiktokdown pic.twitter.com/aDVbzfxtts

TikTok said on Twitter that they were aware that some users were experiencing problems, saying that its staff were “working to quickly fix things.”

On Wednesday Secretary of State Mike Pompeo said Washington was “certainly looking at” banning TikTok and other Chinese apps, following the lead of India, which banned 59 Chinese apps after border skirmishes with Beijing, and Australia, which has threatened to do the same. 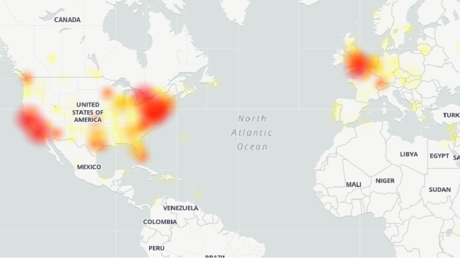