Opposition leader Svetlana Tikhanovskaya has urged the European Union to reject the result of Belarus’ contested presidential election, while calling on the bloc to respect the country’s sovereignty.

In a video message addressed to the European Council, Tikhanovskaya, who fled to Lithuania last week, said that the EU should not recognize the “fraudulent” August 9 election, adding that President Alexander Lukashenko has “lost all legitimacy in the eyes of our nation.”

She announced the formation of the National Coordination Council of Belarus, which will “lead the process of peaceful transition of power via dialogue.” The council will call for “new, fair, and democratic presidential elections,” the main opposition candidate said.

International observers should participate in order to ensure the legitimacy of the new election, Tikhanovskaya added, while stressing that EU leaders should “respect the sovereignty of Belarus and the choice of the Belarusian people.”

Her message comes ahead of the European Council’s emergency meeting on the situation in Belarus, which is scheduled to take place later on Wednesday. In a statement announcing the summit, European Council President Charles Michel said that “the people of Belarus have the right to decide on their future and freely elect their leader.” He condemned the violence against anti-government protesters.

EU foreign policy chief Josep Borrell said last week that the bloc would not recognize the result of the Belarus elections, and Brussels has threatened Minsk with sanctions over the political crisis. 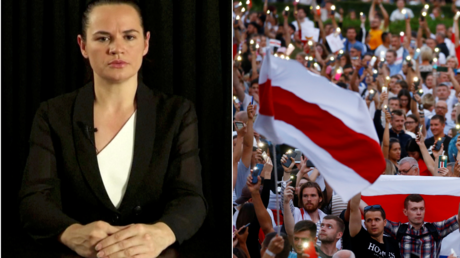