Demonstrators left the protest-hit Minsk Tractor Works and headed towards government facilities in the center of the capital shortly after the country’s prime minister arrived at the factory to talk to workers.

The march on Friday comes amid a wave of anti-government protests in Belarus. The plant, also known by the abbreviation MTZ, is one of the biggest employers in the Belarus capital, giving jobs to some 15,000 people. A significant part of the staff took to the streets of Minsk chanting “Leave” to incumbent President Alexander Lukashenko and calling on workers from other plants to join them.

The march remained peaceful and was not opposed by the police at the time of writing. However security officers had blocked the path towards the building of the Central Election Commission, preventing the protesters from reaching it.

#Belarus. Happening right now. Thousands of demonstrators are marching on the main street in #Minsk. Workers of MTZ, Minsk Tractor Works, who announced strike, joined street protesters. Last time something like this happened 30 years ago. pic.twitter.com/fhRGB5uFHa

The workers left MTZ shortly after Belarus Prime Minister Roman Golovchenko arrived there to talk with representatives of the protest movement. He reportedly refused to speak to the crowd in front of the press, angering many there and setting off the protest march. Nonetheless, some workers remained at the facility ot speak to the prime minister.

Belarus has been gripped by intense mass protests since Sunday, when it held a presidential election. The official result gave a landslide victory to Lukashenko, but the opposition believe the vote had been rigged and rallied to decry the outcome.

The government responded with heavy-handed police action, arresting thousands of participants. The approach backfired after evidence of police brutality published on social media won opposition forces wide public sympathy. The threat of a nationwide strike is becoming more realistic with each day as workers at Belarus’ largest manufacturers continue to join the protesters. 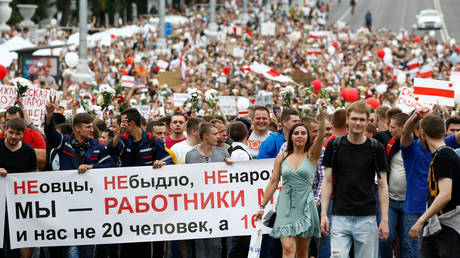