A new wave of panic buying has hit Melbourne, with major queues lining up outside supermarkets after local authorities announced the reintroduction of stricter anti-coronavirus measures – that don’t actually prohibit shopping.

The stage three lockdown measures will return to metropolitan Melbourne and areas north of the city starting on Wednesday, Victorian PM Daniel Andrews confirmed. The announcement came atop the decision of two major chains, Coles and Woolworths, to remove all buying restrictions at stores all across Australia.

The mix of two has apparently had quite an effect on the public, as major queues emerged at shops across the city almost immediately with people lining up at night to lay their hands on some ‘essentials’.

Lock down is back and so is the panic buying and the long lines to enter the super market in bayside Melbourne pic.twitter.com/NKFu2IrLmt

The queues were pictured both inside and outside major supermarkets.

The line for groceries in suburban #Melbourne just an hour after lockdown measures were announced … @abcnews @abcmelbourne pic.twitter.com/GhdlUNAkPp

Came to pick up a few things from Woolies – massive q to get in! pic.twitter.com/zf2V7lZock

Some stores had their shelves stripped clean by the panic buyers, footage from the scene indicates.

The reasons behind such behavior remain a mystery, particularly since the tighter lockdown does not actually prohibit people from shopping. Many users online condemned the panic buyers, arguing they are the true and only reason behind any potential shortages.

While panic buying has been observed worldwide amid the pandemic, Australians have turned out to be particularly hungry for stockpiling groceries. During the first wave of the pandemic-induced panic, several violent incidents across the country made headlines as angry shoppers literally brawled over toilet roll.

The “ridiculous” behavior was condemned by the country’s PM Scott Morrison as he urged the panic buyers to “stop it,” assuring the public there was enough groceries for all. 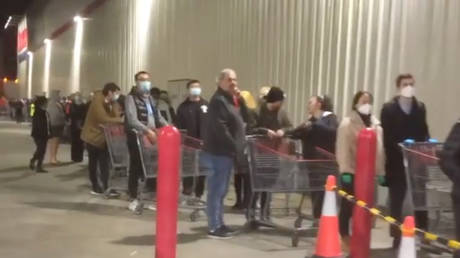 Five asteroids to fly past Earth i...