That’s 2020 for you: Twitter goes NUTS after squirrel tests positive for BUBONIC PLAGUE in Colorado

That’s 2020 for you: Twitter goes NUTS after squirrel tests positive for BUBONIC PLAGUE in Colorado

An unlucky squirrel from Colorado has tested positive for bubonic plague, local health officials have said. With US Covid-19 cases soaring past the 3.3 million mark, news on the classic disease’s comeback have caused quite a stir.

The discovery of the infected rodent was announced by the Jefferson County Public Health (JCPH) body. The squirrel is the first case of plague in the county this year, the authority noted.

“Plague is an infectious disease caused by the bacteria Yersinia pestis, and can be contracted by humans and household animals if proper precautions are not taken,” the JCPH warned.

The dreaded disease, which decimated the world’s population at least three times during massive pandemics over the course of history, is extremely rare nowadays. Between 1,000 and 2,000 cases of the plague are still registered worldwide each year, coming primarily from the Democratic Republic of Congo.

In the US, the infection is particularly rare with around 1,000 human plague cases registered in over a century.

While the probability of a full-scale outbreak of plague on American soil is next to zero, news of the squirrel’s misfortune caused quite a stir on social media, with users well-prepped for disaster by the ongoing coronavirus pandemic.

Many said gloomily that anything bad is possible this year, whether it be an outbreak of plague, a zombie apocalypse or a killer meteorite.

Bubonic Plague in Colorado??? The world wants us dead. I got my Zombie survival rules, do you?

More cool-headed users pointed out that the bubonic plague that once boasted a terrifying mortality rate of some 95 percent, is perfectly treatable nowadays. Although, no one is safe from catching other forms of the disease – deadly pneumonia and extra-deadly septicemia – if an actual large outbreak occurs.

Idk why everybody is freakin out about the bubonic plague. It def isn’t pleasant to have but yall know it’s treatable right ?? And it didn’t get eradicated so it still exists on earth so it’s not new for rodents to be carrying it still (albeit uncommon)

Some coronavirus-deniers suggested the plague story is simply a new diversion planned by the government as the Covid-19 pandemic was thinning out. Over 3.3 million cases and nearly 140,000 dead in the US alone are apparently not scary enough statistics.

About keeping all of us in line, globally. And if this don’t work they’ll bring out the swine flu virus or the bubonic plague and then bring on the NWO

The very fact that some random squirrel was caught and tested was also found to be suspicious by some.

Like, how do they just find a random squirrel that has the bubonic plague? https://t.co/FvBCPfkM4K

Then there were those that didn’t take the story too seriously and stuck to more light-hearted joking about the squirrel’s bad luck, with one suggesting rodents should now all “wear masks” to prevent a pandemic.

This just in : Gov PoIis is announcing a new executive order mandating all squirreIs wear masks.

Also, aII businesses must cIose if they have squirreIs in trees near them. 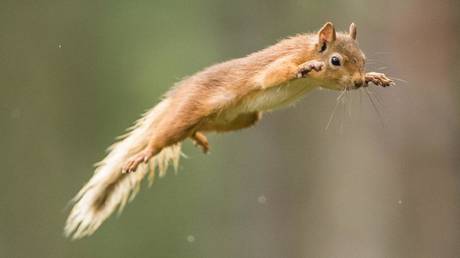 Thousands of frustrated WhatsApp u...