Close
Trending News
HomeWorld‘Thanks for the hint’: Amazon halts sale of photo book with intro by PEDOPHILIA advocate after inquiry from RT

‘Thanks for the hint’: Amazon halts sale of photo book with intro by PEDOPHILIA advocate after inquiry from RT

‘Thanks for the hint’: Amazon halts sale of photo book with intro by PEDOPHILIA advocate after inquiry from RT

Amazon’s German website has halted the sale of a controversial photo book widely considered to be a work of child pornography, and featuring an introduction by a known pedophilia advocate.

The US retail giant ditched the publication only after an alert from RT Deutsch.“Zeig mal!” (“Show Me!”) was first published in Germany in 1974 as an “educational book for children.” It was authored by American photographer Will McBride, who mostly lived and worked in West Germany, and contains nude photos of pre-adolescents “discovering and exploring their sexuality.”

The book initially received some positive reviews on the both sides of the Atlantic, including from the Los Angeles Times, which called the photographs “beautiful… graceful, charming, and elegant.”

But later the work was condemned as child pornography and banned in countries including New Zealand, as well as several US states. The work is considered highly controversial in Germany, but has never been subjected to a formal ban.

Aside from the nude child photos, the German edition contains a foreword by disgraced psychologist Helmut Kentler, whose name was at the center of a child abuse scandal that Berlin is still reeling from.

Kentler was an open advocate of pedophilia, and spent much of his career arguing for the normalization of sex between adults and children, claiming it could have a “very positive effect on a boy’s personality development.”

In the introduction, Kentler wrote that “if such relationships are not discriminated against by the environment, then the more the older person feels responsible for the younger one, the more likely they are to have positive consequences for personal development.” Back in 2014, the text by Kentler was described by German reporter Stephan Hebel as an “open call for pedophilia.”

The same psychologist, who argued against people alerting law enforcement if they become aware of children involved in involuntary sexual contact with adults, has now been revealed to have run an “experimental program” in Berlin to place foster children into the care of known pedophiles. The city authorities supported the scheme throughout the 1970s, 80s and 90s.

When RT Deutsch alerted Amazon about the disturbing content of the book, the company promptly removed it from the online store. In mere hours, all links to the book’s page were deleted.

The company has not publicly commented on the issue, but an Amazon representative thanked RT Deutsch reporter Timo Kirez for the “hint” in a phone call, and explained that it was difficult for the staff to keep track of all the items on sale due to their sheer number.

Meanwhile, the book remains legal in Germany and, if the reviews on its now deleted Amazon page are any indication, has its fair share of fans. 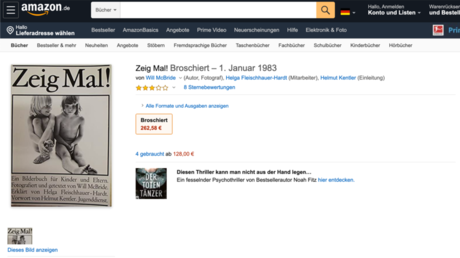