Thai protesters have flocked to the streets amid ongoing demands for the prime minister’s resignation and reforms to limit the king’s power on the anniversary of the 89th Siamese Revolution.

Hundreds took to the streets in Bangkok on Thursday to protest Prime Minister Prayuth Chan-o-cha’s government, with some protesters gathering at Bangkok’s Democracy Monument, and others marching to the Government House, where the prime minister’s offices are. Demands include reducing the power of the monarchy under the rule of the current king, Maha Vajiralongkorn.

The protests are being held symbolically on the 89th anniversary of the Siamese Revolution – a coup that overturned 800 years of absolute monarchal rule and turned Thailand into a constitutional monarchy. Protest leader Jatupat ‘Pai Daodin’ Boonpattararaksa said, “In 89 years since the end of absolutism we have not got anywhere,” adding that changes to the constitution must “come from the people.”

At around 3pm local time on Thursday, key protest leaders, including Jatupat, entered the Thai parliament to submit their version of amendments to government officials and to speak with them. It is not yet known how the government has reacted to the proposals.

Key protest leaders like @paritchi @jatupt @PanusayaS have now gone inside #Thailand parliament representing the people. They want to submit a letter stating their version of a charter amendment & hopefully have a chance to address some MPs inside the house #ม็อบ24มิถุนา pic.twitter.com/fAGvm0fW1H

While the protests have so far been mostly peaceful, there have been slight altercations and booing of members of the government that have attempted to speak with the public.

Slight scuffle earlier as some #Thailand protesters got annoyed with government MP who came out to meet protest leaders. Government MP was trying to speak but was booed off, chased away, forcing him to retreat back to parliament #ม็อบ24มิถุนา #whatshappeninginthailand pic.twitter.com/1I5cuBWAzI

Government MP on stage with #Thailand anti-government protesters as all around chanting for current administration & his ruling coalition party to quit. He was booed off stage #ม็อบ24มิถุนา #whatshappeninginthailand pic.twitter.com/8uaniMgWiw

According to the deputy head of the Bangkok police, Piya Tavichai, around 2,500 police officers have been stationed to monitor the protests. So far, they have barricaded roads and other routes leading to key government buildings.

3rd police barricade so far after almost 2 hours of marching towards #Thailand parliament house. Certain roads leading to key government buildings are where police don’t want protesters to get near. But protesters continue on #ม็อบ24มิถุนา #whatshappeninginthailand pic.twitter.com/Q5GOTPdDbp

Demonstrations are largely being held in the capital, though they have also been planned in the northern city of Chiang Mai, as well as the southern region of Nakhon Si Thammarat.

Protests began taking place across the country in July 2020, when thousands of students took to the streets to demand the resignation of the prime minister and his government, constitutional reform, and an end to harassment from the authorities.

Prime Minister Prayuth Chan-o-cha came to power in 2014, after the military seized control from Yingluck Shinawatra’s caretaker government, which made the general the leader of the country. The next election will take place in 2023.

The current king of Thailand increased his royal power and wealth when he took the throne in 2016. The hashtag #WhyDoWeNeedAKing was tweeted over a million times after he breached Covid-19 measures to return to Bangkok to commemorate his dynasty without quarantining during the height of the pandemic. 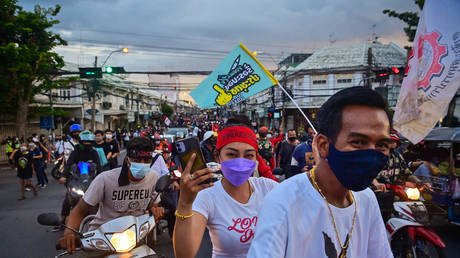 Covid pandemic made rich richer &a...