Beijing’s repeated accusations of foreign interference in Hong Kong’s internal affairs appear to have been vindicated, after a government funding freeze exposed US financial support for activists in the semi-autonomous city.

Around $2 million had been earmarked to help Hong Kong activists “evade surveillance by the Chinese government,” according to a recent TIME report. The cash was never delivered though, due to restructuring and cuts at the US Agency for Global Media (USAGM), which allocates federal funds for overseas news and information initiatives, including Voice of America. Some funds had already been paid out, however.

The money was supposed to go towards the Washington-based Open Technology Fund (OTF), which pours cash into internet “freedom” projects around the world. Although officially an independent non-profit, the organization is funded by Congress.

The funding freeze also affected around $500,000 in OTF resources purportedly used to help activists around the world avoid digital attack and detection. Several payouts from this fund were made to groups in Hong Kong since protests began last year.

The OTF also provided $3 million to help develop Signal, the encrypted messaging app used by many Hong Kong protesters. Although the OTF remains largely under the radar, the more prominent National Endowment for Democracy (NED) has also played an active role in Hong Kong. In 2019, the US-funded non-profit spent an estimated $643,000 to aid “civil society” groups in the city. The organization denies that the cash was used to fund demonstrations.

The US government’s financial ties to Hong Kong activists has been something of an open secret. In June, the Electronic Frontier Foundation urged the US government to continue funding the OTF’s overseas projects, stating that the funds were necessary to help “Hong Kong’s democracy movement.”

The US cash pipeline to Hong Kong has prompted some to accuse Washington of clear double-standards when it comes to foreign influence operations.

“Imagine how the American government would react if multiple Chinese state agencies such as Xinhua were exposed secretly helping protest groups across the United States to evade surveillance and crackdowns by law enforcement agencies,” observed South China Morning Post columnist Alex Lo. He speculated that if the roles were reversed, the United States would most likely “threaten China with war.”

Hong Kong protesters have never been shy about their relationship with and admiration for Washington. Last August, a group of leading activists were photographed meeting with a senior official from the US consulate.

A month later, US-flag-waving demonstrators took to the streets of Hong Kong to demand that Donald Trump “liberate” them from Chinese rule.

For months, Beijing has called on the United States to stop interfering in Hong Kong. Well-aware of activists’ foreign patronage, China announced sanctions against NED in December, accusing the non-profit of promoting “extremely violent criminal activities.” For now, the OTF has managed to avoid being slapped with similar restrictions. 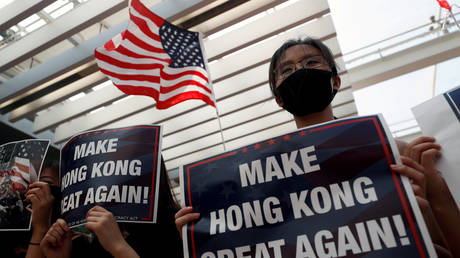