A magnitude-7.5 earthquake has struck in the Mexican state of Oaxaca, rattling buildings in the country’s capital more than 200km (124 miles) away.

The tremor struck on Tuesday morning, with Mexico’s National Seismological Service rating its strength at 7.1 before upgrading the intensity to 7.5. The United States Geological Survey (USGS), meanwhile, recorded it as a 7.7 magnitude earthquake. Such a huge quake is classified as ‘major’, and can cause serious damage.

The USGS placed the quake’s epicenter along the southern coastline of Oaxaca, yet its effects were felt as far inland as Mexico City. Videos taken in the capital show buildings and power lines swaying, as what sounds like dull explosions ring out in the background.

There were no immediate reports of casualties.

Earthquake in Mexico City- still occurring – not sure where epicenter is nor if there is any real damage pic.twitter.com/KDAou9YhPG

Photographs from the town of La Crucecita, just 20km from the epicenter, show streets strewn with rubble and damage to buildings.

In one Mexico City suburb, the seismic waves could be seen literally pulling the ground apart.

According to the USGS, around 18 earthquakes above magnitude 7 occur globally every year. The last such quake to strike Mexico hit Oaxaca in 2018, killing 14 people. One year earlier, the deadly Puebla earthquake struck 55km from Mexico City, killing 370 people and injuring more than 6,000, and leveling more than 40 buildings.

Mexico is one of the world’s most seismically-active regions, owing to its position atop several tectonic plates. As a result, the country experiences an average of 40 earthquakes every day, the majority of them minor. Mexico City, however, is built on a dry lake bed, and its soft soil amplifies the effects of any major tremors. 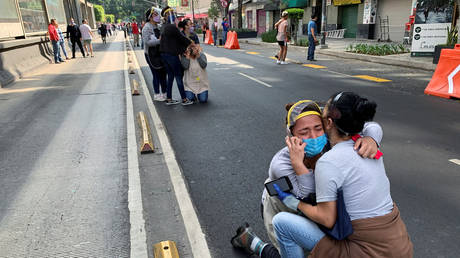