Massive crowds of people have packed one of the largest squares in Tel-Aviv on Saturday to decry how Prime Minister, Benjamin Netanyahu, handled the coronavirus pandemic and its harsh economic fallout.

The rally at Rabin Square, which is a traditional protest spot in the city, was staged by self-employed, small business owners and students, who claim that, unlike salaried workers, they never received the promised financial help from the government.

The demonstrators, who also neglected self-distancing rules, carried banners, which read “Let us breathe” and jokingly asked for charity money to be sent to them via a baking app.

The Jerusalem Post paper reported that the event was attended by some 80,000 people, however other estimation say the rally was lower in size.

“No more games,” Ronen Mili, one of the protest organizers, said. “We waited for four months and haven’t seen a dime.”

Protests against the corruption in Israel.
Against CrimeMinister Netanyahu pic.twitter.com/SbqH8m6Zhc

Israel had imposed strict lockdown measure to stop the spread of Covid-19 in March, banning public gatherings and all entertainment events, while only allowing the most essential specialists to go to work.

The measures were lifted in May under public pressure as unemployment rate reached staggering 21 percent. But the restrictions had to be reinstated as the virus made a comeback.

Israel, which is populated by nine million people, has registered 37,000 coronavirus cases, with 350 fatalities. PM Netanyahu has recently said that the country is “in a state of emergency” over Covid-19. 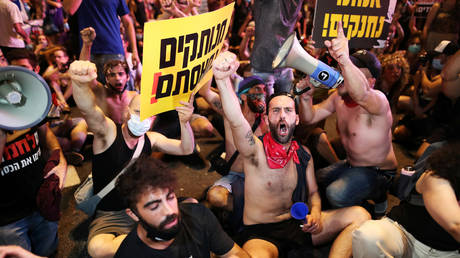 Young drivers could be forced to g...