Iran has praised the outcome of a summit with the chief of the International Atomic Energy Agency (IAEA), Rafael Grossi, who traveled to Tehran amid growing geopolitical tensions over the country’s nuclear program.

Ali Akbar Salehi, head of the Atomic Energy Organization of Iran, said during a press conference on Tuesday that the talks were “constructive” and that both sides had agreed that the IAEA “will carry out its independent and professional responsibilities.” For its part, Iran pledged to fulfill its commitments to the UN nuclear watchdog, he said.

A new chapter of cooperation between Iran and the International Atomic Energy Agency will start.

A statement outlining the results of the talks will be released later in the day.

The meeting marks Grossi’s first visit to Iran since assuming office in December. The IAEA chief said after the summit that there were no behind-the-scenes politics involved in his trip.

“There are issues that need to be addressed … this does not mean a political approach towards Iran,” Grossi said, according to Iranian state media.

Tehran denied that Grossi’s visit was connected to Washington’s attempts to impose “snapback” sanctions on Iran. The US has accused the Islamic Republic of violating its commitments under the Joint Comprehensive Plan of Action (JCPOA), despite the Trump administration having pulled out of the deal in 2018.

Gossi had earlier explained that the goal of the meeting was to ensure that his agency’s inspectors had access to suspected nuclear sites in the country.

Iran has repeatedly called on the international community to honor its side of the JCPOA, and has criticized the accord’s European signatories for not doing more to resist Washington’s unilateral sanctions on Tehran. Washington has been battling with UN Security Council members, including allies Britain and France, over its desire to ratchet up sanctions on Iran. 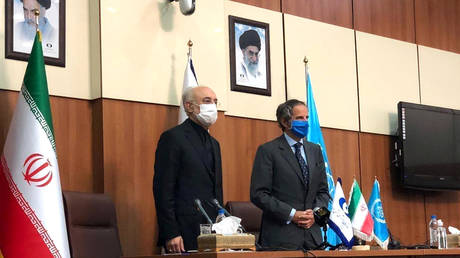