Close
Trending News
HomeWorldTaliban says it captured key entrance to Panjshir valley, local resistance denies it – as both claim heavy losses on other side

Taliban says it captured key entrance to Panjshir valley, local resistance denies it – as both claim heavy losses on other side

Taliban says it captured key entrance to Panjshir valley, local resistance denies it – as both claim heavy losses on other side

The Taliban has claimed its fighters seized a key position at the entrance to the Panjshir valley – the only Afghan province still out of the group’s control. Local resistance has denied the Taliban made any advances.

The Taliban launched a major operation to take the Panjshir valley on Thursday, after the negotiations with the local resistance movement failed, according to spokesman Zabihullah Mujahid. He said the Taliban fighters entered the province and captured eleven “important” positions along the main road leading to the eastern province of Badakhshan. Among them was the town of Shattal in the Parwan province, at the southwestern entrance to the valley.

Representatives of the National Resistance Front (NRF) denied the Taliban made any advances into the valley, however, and claimed they were still in full control of all the passes leading into Panjshir. The Taliban’s “multiple” attempts to enter the area were thwarted, the militia claimed.

“They did not succeed in their offensive and they did not advance even a kilometer,” said Fahim Dashti, a NRF spokesman.

Both sides claimed to have inflicted heavy losses on their enemies, but the claims were impossible to verify independently.

The Taliban’s Mujahid said the fighting started after the talks with the Panjshir militia failed. According to some reports, the Taliban was ready to accept any governor the local militias would appoint but demanded that the flag of the “Islamic Emirate of Afghanistan” be raised over the valley – something the NRF refused to do.

According to Amrullah Saleh, who now styles himself the “acting president” of Afghanistan, the flags of the Islamic Republic – the former, US-backed government – are still flying in Panjshir.

Saleh was the deputy to Ashraf Ghani, the NATO-backed president who fled the country on August 14, as the Taliban approached Kabul, triggering the mad scramble of the US-organized airlift.

The standoff between the Taliban and the Panjshir resistance has been shaping up since then. On August 31, Reuters reported that at least eight Taliban fighters were killed as they tried to move on the NRF positions. The Taliban did not comment on the losses at that time, as the group apparently was still seeking a negotiated solution to the conflict with the militias.

Last week it was reported that local militias in the northern Baghlan province had evicted Taliban members from three districts, only for one to be recaptured soon after. The Taliban now claims to have recaptured all three. 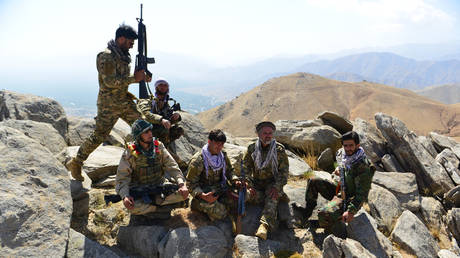