In what could mark a landmark moment in automation for the world’s factories, scientists at the Massachusetts Institute of Technology (MIT) have created a soft-fingered robot adept enough to handle wires and thread.

Predictions about how much automation will affect manufacturing jobs are ten a penny these days, yet it’s a generally accepted fact that a lot of humans are going to be replaced in their jobs by robots in the coming years. Indeed, a study last year by global forecasting firm Oxford Economics suggested the number may be as high as 20 million people by 2030.

Now, in a world radically altered by Covid-19, where close-quarters working may no longer be the norm, manufacturing as we currently know it could be on the way out.

MIT’s Computer Science and Artificial Intelligence Lab (CSAIL) has shared the results of a new project that wants to take the man out of manufacturing for good: a two-fingered robot that is expected to be dexterous enough to handle and untangle wires, and even sew materials.

The robot’s design incorporates soft pads with embedded sensors, which allow it to continually ‘feel’ the material it’s working with. These sensors are able to provide high-resolution tactile information using so-called “GelSight” technology, with tiny cameras baked into the soft rubber material.

The CSAIL team, led by post-doctoral student Yu She, demonstrated what to humans might seem insignificant: a robot plugging an audio jack into an MP3 player. Yet the ability of a robot to complete such a simple task could effectively prove to be the missing link toward more complex manoeuvres.

The implications of this study are significant. The researchers say the MIT robot could be used in a wide array of manufacturing scenarios, whether that be replacing work deemed either too dangerous or too dull for humans.

From the automobile industry and its reliance on intricate wiring, through medical advances that require super-precise stitching, to the garment-manufacturing arena with its oft-reported human rights abuses, this little robot could well end up being a major player. 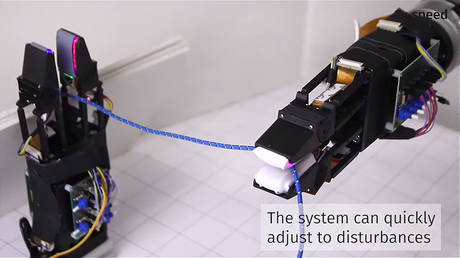