Using the coronavirus to score political points has only made the global health crisis worse, the World Health Organization’s director-general has claimed, in what some have interpreted as a broadside against Donald Trump.

The politicization of the pandemic has “exacerbated” the effects of the disease, Tedros Adhanom Ghebreyesus said during an online conference on Monday, warning that the virus was still spreading.

We know that the pandemic is much more than a health crisis, it is an economic crisis, a social crisis and in many countries a political crisis. Its effects will be felt for decades to come.

Adhanom Ghebreyesus didn’t get into specifics while speaking to the health ministers of the UAE, Sweden, and Norway during the virtual summit, but it appears many took his remarks as a not-so-subtle slight against US President Donald Trump.

Without naming President #Trump , #WHO Director-General – Tedros Ghebreyesus says that the ‘politicization of the #coronavirus pandemic has exacerbated it.’ He also adds – there is a lack of global leadership that is needed during this crisis to unite the world. @WorldGovSummit

Trump announced at the end of May that he would cut ties with the WHO, accusing the organization of doing Beijing’s bidding and failing to enact reforms following the outbreak of Covid-19. The US leader claims that China pressured the health agency to mislead the world about the coronavirus after the first outbreak was detected in Wuhan in December.

Washington’s decision to pull its funding was condemned by China and even prompted US ally Germany to express concern about the potential “backlash” it would have on international health.

Adhanom Ghebreyesus’ comments could mark a widening rift between his organization and the US. The WHO chief had previously praised Washington’s “immense” contribution to global health and called for cooperation despite Trump’s move to quit the UN body.

There have been nearly nine million Covid-19 cases registered worldwide since December, resulting in around 468,000 deaths, according to a tally maintained by Johns Hopkins University. Some countries, such as South Korea, have reimposed measures to stop the spread of coronavirus following a second wave in new cases. 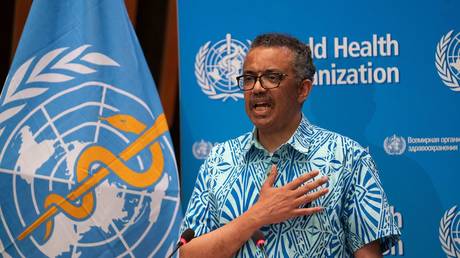