Beijing has slammed Taiwan for its new plan to harbor asylum seekers from Hong Kong, which has seen massive anti-government protests and rioting. This “plot” will backfire, China said.

Earlier this week, Taiwan unveiled a plan to set up a government-funded agency to help asylum seekers from Hong Kong, a self-governing region of China, settle on the island. The proposed scheme includes a basic living allowance and help with employment for Hongkongers seeking “shelter” from Beijing.

Zhu slammed the plan as a “political plot to intervene in Hong Kong affairs and undermine Hong Kong’s prosperity and stability.” She said that the idea undermines the ‘one country, two systems’ formula, which allows Hong Kong to retain a degree of autonomy in its domestic policy, while China handles its foreign affairs.

Hong Kong has been grappling with mass anti-government protests for over a year. The rallies were originally triggered by a now-defunct controversial extradition law, but soon grew into a broader protest against Beijing and demands for more civil freedoms. While many demonstrations were initially peaceful, they frequently descended into fierce rioting and street battles with police.

China has repeatedly said that the riots are being incited from abroad and criticized politicians in the US and EU for openly backing the protesters.

Taiwan streamlined its support for the protesters after Beijing began working on a new national security law which could be applied to Hong Kong. One of the city’s protest leaders, Joshua Wong, expressed fear that the legislation will curb political and democratic freedoms.

Hong Kong Chief Executive Carrie Lam, however, said the law will restore stability in the city and “will only target an extremely small minority of illegal and criminal acts and activities,” while basic rights and freedoms will be protected. 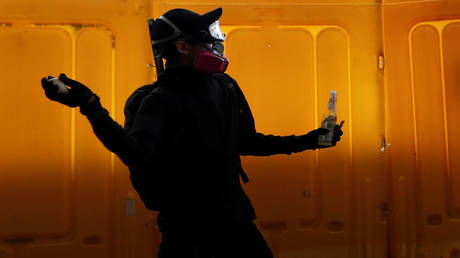 You thought asteroids were bad? ES...

Duterte can choose which Covid...