Taiwan’s military has grounded all of its F-16s after one aircraft disappeared from radars while flying a routine training mission. The incident adds to a string of military crashes on the island this year.

All of Taiwan’s 142 F-16s will remain in their bases for equipment checks, its defense ministry said.

“I have asked the defense ministry not to relax a bit on defense and combat readiness to ensure national security,” President Tsai Ing-wen told reporters.

The US-made F-16 disappeared from radar screens minutes after taking off from Hualien Air Base on the island’s east coast on Tuesday evening. The aircraft was flying a training mission with two other combat jets.

The military has launched a search and rescue operation, as the fate of the plane and its pilot remain unknown.

According to local media, it is a seventh such incident involving a Taiwanese F-16, and the aircraft would be the country’s fourth military plane to be lost this year.

On October 29, an F-5E fighter jet crashed into the sea during a training flight. The pilot managed to eject but died of his injuries later in hospital. 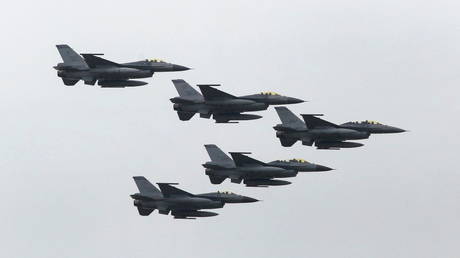