Covering your face in public for non-medical reasons will become illegal in Switzerland after a proposal dubbed a “burqa ban” was accepted by a narrow margin of voters in a binding national referendum on Sunday.

Supporters of the “burqa ban” have prevailed in the Alpine country, with 51.2 percent being in favor and 48.8 percent being against, official data showed after votes were counted.

In line with the Swiss system of direct democracy, the country’s constitution will now be amended to forbid face coverings in public places for all but three specific reasons.

The legislation, which had been promoted by the right-wing Swiss People’s Party (SVP) since 2016, did not mention Islam directly and was claimed by proponents to be aimed at preventing violent rioters from hiding their identities. It was nonetheless dubbed the “burqa ban” by the media and politicians due to also restricting the face coverings worn by Muslim women.

Back in 2009, the SVP initiated a referendum on preventing the construction of new minarets in Switzerland, and also won that vote.

There are several exceptions to the “burqa ban” – it allows the covering of one’s face for security, climate, or health reasons. As such, it wouldn’t contradict the anti-coronavirus measures that oblige Swiss citizens to wear face masks in public places, on public transport, and in indoor workspaces. Muslim women would also be allowed to don burqas and niqabs in places of worship. 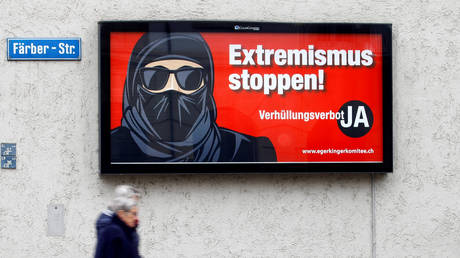