Swedish Prime Minister Stefan Lofven is still the country’s most popular leader, according to a poll released on Thursday, amid an ongoing political crisis following a no-confidence vote in parliament earlier this week.

A Novus poll conducted in the wake of the no-confidence vote found that 38% of Swedish voters still have faith in Lofven, compared with only 35% who support his center-right rival Ulf Kristersson.

Earlier this week, Lofven became the first sitting premier in Sweden’s history to be ousted by opposition MPs in a no-confidence vote. He now has a week to either resign or call a new election, after the Left Party withdrew its support for his government.

The move pushes Sweden back into political chaos, only two years after a deadlocked election resulted in months of negotiations before a coalition government could be formed.

Lofven’s Social Democrats had been propped up in the government by support from the smaller Green Party and Left Party, as well as a confidence and supply arrangement with the Center Party. However, the Left Party withdrew from the government over a dispute about the abolition of rent controls on new-build properties.

While Lofven might have lost the support of the Left Party, meaning he can’t secure the backing of more than half the parliament, his opponent Kristersson equally cannot secure majority support, meaning an election is becoming increasingly likely.

If an election is called, opinion polls show that Lofven’s support has risen by 2% in recent months, while Kristersson’s has fallen by 1%. The Liberals could fall short of the number of votes needed to secure seats, while the Left Party and the Sweden Democrats could see their vote shares rise. 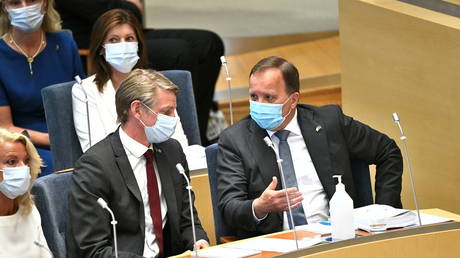 McGregor should have stood up for...