Sweden has stepped up military activity in the Baltic Sea to send a signal to Russia and other nations which it claims have dramatically increased their presence in the region, the country’s top defense officials have said.

The so-called “high readiness action” will bolster Swedish land, naval and air forces in the southeastern and southern Baltic Sea, and on the island of Gotland. The move comes amid “extensive” military maneuvers in the area, both from Russia and the West, the Swedish Armed Forces’ Commander of Joint Operations Jan Thornqvist told local media. He claimed that the current scale of foreign military activity near Sweden has not been seen since the Cold War.

The country’s defense minister, Peter Hultqvist, stressed in an interview that Stockholm was “sending a signal both to our partners and to the Russian side that we are prepared to defend Sweden’s sovereignty.” Citing the political turmoil in Belarus, Hultqvist expressed concerns about regional “deterioration,” while acknowledging that the threat of aggression towards Sweden was “low.”

NATO has been ramping up its presence in the Baltic states. On Tuesday, two warships belonging to a NATO naval group docked in Lithuania. The ships will carry out joint drills with Lithuanian vessels in the Baltic Sea.

Russia has also carried out military maneuvers in the region. Earlier in August, more than 30 Russian warships in the Baltic Sea participated in the country’s annual Ocean Shield exercises.

Although not a NATO member, Sweden participates in military exercises with the transatlantic alliance members. In April, the Scandanavian nation postponed its Aurora 20 military drills, after participating nations pulled out due to the coronavirus pandemic. 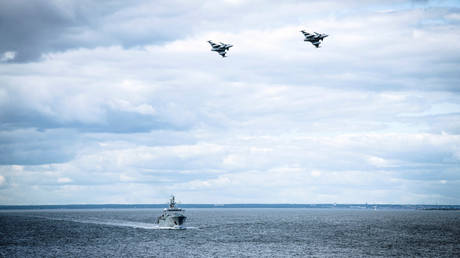 Your dreams are a continuation of...