The ruling sovereign council in Sudan has declared an amnesty for thousands of fighters who took part in civil conflicts, except those faced with charges of genocide or war crimes.

The head of the council, General Abdel Fattah al-Burhan, signed an amnesty decree on Thursday which has immediate effect and concerns “all those who carried arms or took part in military operations or war.” The measure may affect tens of thousands of people.

However, the decree “excludes those with arrest warrants issued by the International Criminal Court or… those wanted for genocide or crimes against humanity,” according to an official statement.

Sudan’s new government had earlier concluded peace deals with the 50,000-strong rebel forces who have been active in Darfur and the southern states of Blue Nile and South Kordofan. But some groups — which are part of these forces and number around 15,000 people — have yet to join Sudan’s accords.

The conflict in the Darfur region of western Sudan has killed 300,000 people and displaced another 2.5 million, according to the United Nations. The government-backed Janjaweed forces have been accused of carrying out atrocities in Darfur, and one of their top commanders surrendered to the ICC in June.

Among those who are wanted by the ICC on charges of genocide and crimes against humanity in Darfur is ousted president Omar al-Bashir, currently jailed in Khartoum.

ICC Chief Prosecutor Fatou Bensouda said in late October that the court would continue its probe into alleged atrocities in the region under al-Bashir. More investigators will be sent to Sudan as the ICC insists he should be handed over to the court. The possibility of trying al-Bashir in a hybrid court set up between Sudan and the ICC had also been discussed, Bensouda also said. 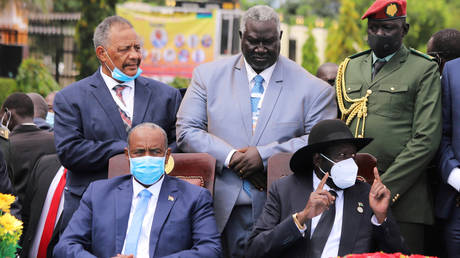