Students, teachers at 41 schools in Germany’s capital infected with coronavirus less than 2 weeks after reopening

Students, teachers at 41 schools in Germany’s capital infected with coronavirus less than 2 weeks after reopening

At least 41 schools in Berlin say that hundreds of their students and teachers are in quarantine, less than two weeks after schools reopened their doors in the German capital.

Elementary schools, high schools and trade schools are all affected, the daily Berliner Zeitung wrote on Friday, and city education authorities confirmed these figures to AP.

The reopening of schools and the possible risks of virus clusters are hotly debated in Germany. There are 825 schools in Berlin. Some states in the country are still on summer vacation, while others have been back to school for about two weeks.

The German government said earlier it is determined to not direct schools back into a lockdown as was the case in March, even as the infection rates go up. Nevertheless, schools have been ordered to send single students, or classes that had possible exposure, into quarantine.

Keeping schools open is a “top priority” for the government in Berlin, and more important than allowing fans to return to sports stadiums or big crowds to gather for mass events.

Chancellor Angela Merkel said on Thursday that there are too many different regulations in place across the country. People “simply don’t understand” why they’re allowed to do one thing in Berlin that may be banned in Bavaria, she added.

At least 230,048 people have been infected with the virus in Germany, and 9,260 have died, according the Robert Koch Institute. 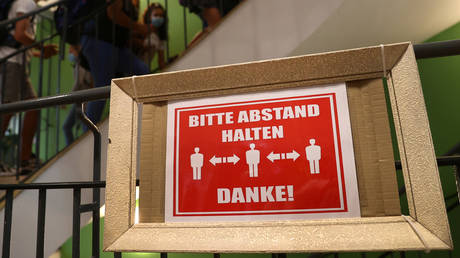 ‘Eurozone at crossroads’ as econom...