New tough rules for mask-wearing were introduced in South Korea’s capital, Seoul. Officials are struggling to contain the rise in coronavirus infections, which has been linked to a church and a massive protest rally.

Starting on Monday, Seoul residents must wear masks indoors and outdoors at all times, except when eating. Similar orders have been in place in the Gyeonggi Province, which surrounds Seoul, and the North Chungcheong Province, since last week.

“We hope to again set the notion and remind all residents that wearing face masks is the basics of staying safe in everyday life, as well as a social promise,” Seoul’s acting mayor, Seo Jeoung-hyup, told reporters.

People were previously mandated to wear masks only on public transportation, including buses, the subway, and taxis. This rule was introduced in May when the nation was first hit by the coronavirus.

For months, South Korea was widely hailed for its success in bringing the infection rate to near zero by quickly arranging mass testing and effective contact tracing. However, authorities sounded the alarm when new coronavirus hotspots kept emerging in recent weeks.

A total of 266 new cases were reported on Monday, of which 258 were locally-transmitted. It was the first time the daily increase has fallen below 300 in four days.

The rise in infections was linked to the Seoul-based Sarang Jeil Church, as well as a massive anti-government rally that took place in the capital on August 15 despite warnings against large gatherings.

Authorities are currently discussing the option of imposing the highest level of social distancing rules, known as Phase 3. “If we can’t stop it at this stage, we have no choice but to upgrade to the third phase of social distancing,” President Moon Jae-in told his aides, as cited by Reuters. 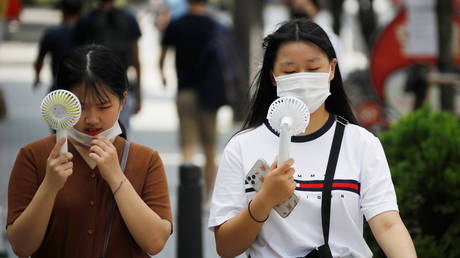 Soldiers and civilians killed in b...