‘Stop ruining everything’: TIME skewered online after denouncing superheroes as ‘cops in capes’

‘Stop ruining everything’: TIME skewered online after denouncing superheroes as ‘cops in capes’

Hollywood is finally being held accountable for romanticizing the police, TIME gleefully noted in its trailblazing takedown, but the campaign to reexamine the insidious ‘good cop’ narrative in entertainment should be extended to fictional vigilantes who often possess unfair super-privileges.

“What are superheroes except cops with capes who enact justice with their powers?” the magazine bravely (and rhetorically) asked.

TIME correctly pointed out that Batman sometimes ignores orders and “goes rogue,” which is deeply problematic since there’s “no oversight committee to assess whether Bruce Wayne’s biases influence who he brings to justice and how.” This is just one of many disturbing examples that shine a light on the dark underbelly of crime-fighting comic book characters, the TIME article argues.

To make matters worse, it adds, the creators and stars of superhero films are often white, heterosexual males – opening the door to rampant “sexism, homophobia, transphobia and other forms of bigotry” in the fictional worlds where men and women in tights fly around and fight bad guys.

Obviously, everyone on social media was deeply impressed with this airtight case for canceling these caped oppressors.

No. Stop ruining everything!

“Now it’s time to drop your subscription to TIME,” read one Twitter comment. Others lamented how benign entertainment was now under siege by “bizarre woke culture.”

Movies are going to be ruined by this bizarre woke culture. Star Wars, The Terminator franchise, and various other movies have already been destroyed by this anti “white straight male” narrative that has crept in to our once beloved movies. Now they want to destroy superheroes.

Incredibly, it appears that the Black Lives Matter movement has already had a nasty run-in with superheroes. The team promoting the upcoming ‘Marvel’s Avengers’ video game released a downloadable background display that depicted an in-game photo of a defaced Captain America statue.

The image was apparently already connected with the game’s lore, but it nonetheless peeved anti-racist activists, who apparently thought it was connected to the vandalization of statues across the US and Europe. The company behind the game pulled the image after facing backlash from the online outrage mob. 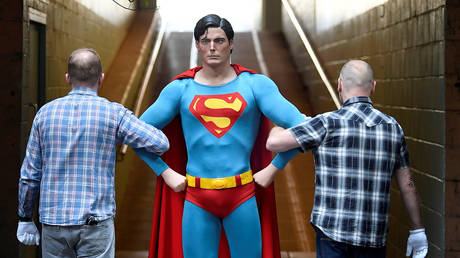