Anti-government protests in Belarus have won the heart of renowned UK actor and comedian Stephen Fry, who pleaded with his online followers to support the cause – but the feedback he got was far from overwhelmingly positive.

Fry, who broke a “Twitter holiday” on Thursday, uploaded a two-minute video of himself emotionally decrying the deeds of Belarusian President Alexander Lukashenko, who, in his words, “stole another election from the people.”

The continuing protests, sparked by Lukashenko’s re-election after the August 9 vote, have been marked by widening strike action affecting industrial sites all around the country. Likewise, the anti-government sentiment was supported by employees of theaters in Minsk, Belarus’ capital city.

Breaking into my twitter holiday for an important reason…. #standwithbelarus pic.twitter.com/bJNdiZfeHh

Fry, of course, could not resist speaking out in support of “workers at the National Theater, for example, who’ve raised the flag of Belarusian freedom above their building,” as well as the liberal-leaning Free Theater “in their peaceful resistance against dictatorship.”

His emotional appeal, not dissimilar to the established media’s narrative on the Belarusian protests, won him a round of applause from his Twitter followers. Some tweeted their praise for Fry’s call, while others professed their love or called him “a role model for humanity.”

Not everyone, however, was responsive to Fry’s call “to stand with the people of Belarus and make their voice heard all over the world.” Online critics bashed his ignorance and naivety.

READ MORE: ‘We want to be a bridge between East & West’: Belarus opposition does NOT plan to end country’s ‘deep’ relationship with Russia

“I am sure Stephen hasn’t the faintest clue about Belarusian politics and who the players are,” one suggested, citing examples of coup attempts in Bolivia and Venezuela.

Skeptically-minded Twitter commenters threw a little fly of irony in the ointment. “Please Stephen help us too, the people of Israel, against our prime minister – aka crime minister,” another user wrote, in a not-so-subtle nod to Benjamin Netanyahu who is being tried for bribery and fraud.

Some people online also sarcastically suggested that Lukashenko’s days are numbered after “Norwich titan Stephen Fry” threw his weight behind the protests.

I’m beginning to suspect Stephen is aligned with the MI6.

Online bashing aside, the famous comedian also previously faced scrutiny over some of his offline remarks. Back in 2017, he was investigated by Irish police for alleged blasphemy after saying God was “a capricious, mean-minded, stupid… utter maniac.” The case was dropped after detectives failed to locate a sufficient number of people offended by Fry’s escapade. 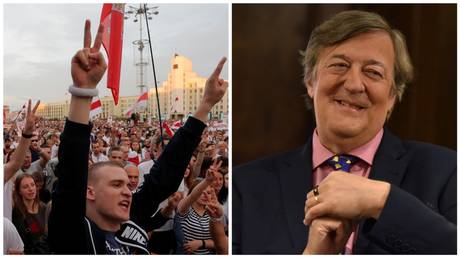