Close
Trending News
HomeWorldStates that do not play by EU rules do not get ‘benefits of Europe’, France tells Poland amid row over law primacy

Countries that do not respect Brussels’ rules cannot reap the “benefits of Europe,” according to French European Affairs Minister Clement Beaune, referring to Poland’s heated spat with the EU on whose law takes supremacy.

Speaking to French news outlet LCI on Thursday, Beaune lashed out at Poland for its ruling earlier this month that saw Warsaw declare that some of its laws were incompatible with EU treaties and took primacy over external powers.

“Nobody is forcing you to enter the European Union. You can even leave it, as we have seen democratically with Brexit,” he said, adding that “Europe is a sovereign and collective choice.”

The French minister even indicated that Warsaw could be slapped with sanctions. “We must first pursue a political dialogue, but if it does not lead in the end, there may be sanctions of different kinds, including financial.”

When you don’t play by the rules, you can’t get the benefits of Europe. The British tried and we didn’t let it go.

Beaune’s comments come after European Commission President Ursula von der Leyen warned on Tuesday that Poland will face penalties for its landmark verdict while speaking at the European Parliament in Strasbourg.

Listing off the potential repercussions for Warsaw, an infringement procedure could see Poland hit with fines, while another option could mean that Brussels withholds pay outs of EU funds to the country. The third possible sanction could result in the EU suspending certain privileges for Warsaw in the bloc, including the right to vote.

Polish Prime Minister Mateusz Morawiecki defended his country’s position after von der Leyen’s comments and said that he backed “European universalism, but we say no to European centralism.” Following the showdown between Brussels and Warsaw, Morawiecki bowed down on the same day, and said that the government intends to dissolve its controversial disciplinary chamber.

Beaune, alongside other European ministers, has been particularly vocal about Poland’s recent dispute with the EU. In the wake of the court verdict, he called Warsaw’s move an attack against the bloc and said that it was a “de facto risk of an exit from the European Union.”

Despite fears of a Polexit, Morawiecki has insisted that Poland wishes to remain in the bloc. 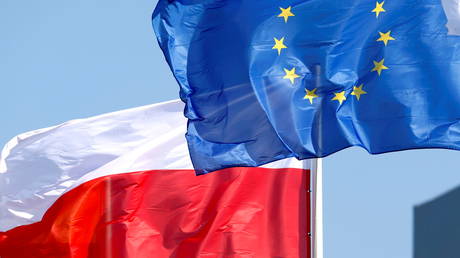