The government of Sri Lanka has rejected pleas to stop cremating Muslim Covid-19 victims and follow their faith’s burial traditions, laying them to rest facing Mecca.

Burials were banned by Sri Lanka in April after Buddhist monks spread claims that buried bodies can infect groundwater and increase the spread of the virus. The World Health Organization (WHO) has said there is no evidence to back up these claims, and that both burying and cremating people who died from Covid-19 are equally safe.

Sri Lankan Health Minister Pavithra Wanniarachchi said that, regardless of the criticism, “this decision will not be changed for social, religious, political or any other personal reason.”

Islamic funerals see those who have passed away bathed three times, shrouded in a white fabric, and buried facing Mecca, their religious site. On the other hand, Buddhists – who make up the majority of people of faith in Sri Lanka and support the current government – are traditionally cremated.

The Organization of Islamic Cooperation (OIC) and Amnesty International have called on the government to respect the Islamic faith and reverse their unnecessary policy. After the government initially introduced the measure, the OIC released a statement calling on authorities to “to respect their religious practices and rituals, safeguard their dignity and to stand firmly against all parties behind the promotion of hatred, Islamophobia, and anti-Muslim sentiment.”

Sri Lanka’s Muslim Council (SLMC) has accused the government of forcing Muslims into not seeking treatment over concerns they will be cremated, resulting in “a disproportionate number of fatalities.” More than half of the country’s reported 222 Covid-19 deaths have been Muslims, who only make up 10 percent of the population.

The country is currently experiencing a surge in Covid-19 cases, having been hit with over 46 thousand reported infections since the start of the pandemic – the majority of which have occurred since September last year. 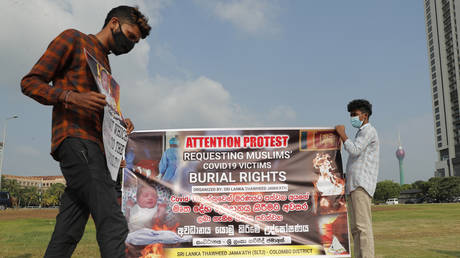