The South Korean military has already verified that North Korea burned the corpse of a government official they shot last week, an opposition leader has disclosed. Pyongyang denies it tampered with the body.

The Ministry of National Defense used “special intelligence” to determine that Pyongyang ordered that the body of the fisheries official be doused in fuel and burned, People Power Party floor leader Joo Ho-young told local media.

“It’s not what the Defense Ministry judged for itself, but what it has heard accurately,” Joo said. He accused the ruling Democratic Party of accepting Pyonyang’s version of events, rather than listening to their country’s own military.

The victim, who worked for South Korea’s Ministry of Oceans and Fisheries, went missing while inspecting the waters near the border between the two hostile neighbors. The civil servant reportedly jumped off his boat and drifted into North Korean waters, reportedly to defect to the North. He was shot by North Korean soldiers as he attempted to flee while being interrogated.

South Korea’s Defense Ministry said on Thursday that the civil servant’s body, as well as his flotation device, had been burned, but it did not provide details about how it reached this conclusion.

Pyongyang has denied that it set fire to the South Korean’s body, but acknowledged that it burned the floating device, purportedly as part of anti-coronavirus measures.

On Monday, South Korea expanded its search for the official’s body. At least six aircraft and 45 vessels are participating in the operation. Pyongyang has accused Seoul of using the search as a pretext to enter its territorial waters and said that it was conducting its own search to locate the man’s remains. The “intrusion” could lead to an “escalation of tensions” in the region, North Korea warned.

The incident led to a rare apology from North Korean leader Kim Jong-un, who said the killing should not have happened. Seoul has urged Pyongyang to further investigate the matter and suggested the possibility of a joint probe.

The two Koreas signed an accord in 2018 that called for closer economic cooperation and a less militarized border. The landmark agreement was followed by denuclearization talks the next year. However, these negotiations failed after North Korea rejected a US plan that would lift sanctions in exchange for disarmament. In recent months, reconciliation efforts have soured between Seoul and Pyongyang. In June, North Korea blew up an inter-Korean liaison office located in its territory, after the North accused Seoul of not doing enough to stop defectors from smuggling leaflets and other anti-government literature across the border. 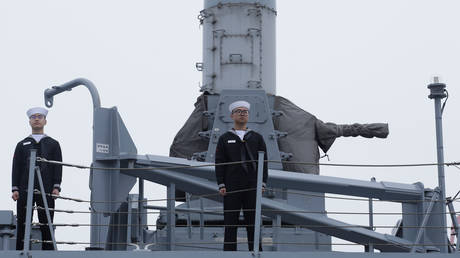