The Spanish government has declared a state of emergency in order to impose Covid-19 restrictions in the capital after a court struck down partial lockdown orders that included a ban on non-essential travel.

After an extraordinary cabinet meeting held this morning, Prime Minister Pedro Sanchez said the state of emergency is being declared to “protect public health,” and that the move will have an immediate effect.

The state of emergency, which was also invoked during the first wave of coronavirus, allows central authorities to limit freedom of movement by introducing police controls on the borders of Madrid and nine nearby towns, which have the highest infection rates.

On Thursday, the High Court in Madrid rejected new curbs forced on the region by the central government. The move included the imposition of a partial lockdown in the capital and neighboring municipalities, applying to some 4.5 million people, where the rate of infection is twice the national average.

The restrictions, which were imposed on October 2, barred residents of Madrid and the nine surrounding towns from leaving the city limits except for work, school or on medical grounds. A curfew was imposed on bars and restaurants from 11pm.

However, following the court ruling, Sanchez told regional authorities that the central government would invoke a state of emergency, which basically keeps the same restrictions, if they fail to pass stricter measures themselves. Central authorities insisted that stricter measures were needed ahead of the upcoming bank holiday weekend.

The country currently has the highest number of coronavirus infections in Europe, and the World Health Organization said there were 741 coronavirus cases per 100,000 people in Madrid in the two weeks to October 7, as the city is again at the epicenter of the Covid-19 crisis in Europe. 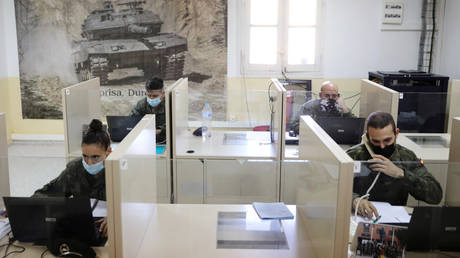