The first South Korean soldier who underwent gender reassignment surgery while on active duty – and who was later forcibly discharged – has been found dead at her home, with the cause of death so far unknown.

Byun Hee-soo, 23, a former staff sergeant who was locked in a legal battle with the South Korean military ever since her discharge over gender reassignment surgery, has been found dead at her home, police confirmed to the Korean news agency Yonhap.

Emergency services were alerted about a potential incident by Byun’s mental health counsellor, who said the transgender woman could not be reached at least since February 28. Firefighters found her dead at her home on Wednesday.

No suicide note was found and the police have not commented on the cause of death, which remains unknown. However, a local mental health clinic said Byun sought to commit suicide three months ago.

Byun rose to prominence in Korea and beyond last year after she sued the South Korean army over her discharge in a high-profile case. The transgender woman underwent gender reassignment surgery in Thailand while on leave in January 2020, becoming the first active-duty South Korean soldier to do so.

Army officials then decided that the removal of male genitals amounted to what is termed a “Level 3 physical disability” according to military laws, Yonhap reported. This disability determination categorized Byun as unfit for further service and she was forcibly discharged.

Byun had sought to continue service in the army’s female corps, but the military rejected her petition for reinstatement. In December 2020, the National Human Rights Commission of Korea (NHRCK) ruled that the army’s decision not to allow her to serve as a female had no legal grounds.

The Center for Military Human Rights Korea, a civic group, also filed a petition, stating that the army’s actions in Byun’s case might amount to discrimination against transgender people.

Legal proceedings in Byun’s case have been ongoing, and the next hearing was scheduled for April. Back in July 2020, when she filed her complaint, Byun expressed her determination to fight the decision “till the end.”

The case sparked a national debate over transgender soldiers in South Korea, which requires able-bodied men to serve in the military for about two years.

“Apart from my gender identity, I want to show everyone that I can also be one of the great soldiers who protect this country,” she said last year after her dismissal. 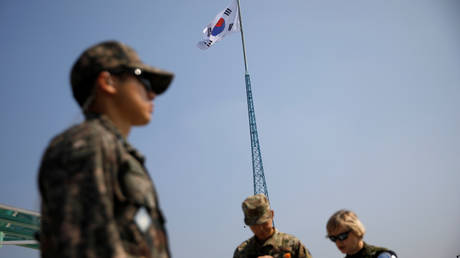