Park Geun-hye, the first woman to have become president of South Korea, has been sentenced to 20 years behind bars and a hefty fine for taking bribes and illegally using the government’s off-the-book funds.

Friday’s verdict by the Seoul High Court wraps up a years-long trial of Park Geun-hye, who was impeached on the back of massive corruption allegations back in 2016.

Judges have effectively reduced her prison term to 20 years from the 30 years sought by public prosecutors, Yonhap reported. Park, 68, will also have to pay a sizable fine of 18 billion won ($15 million).

The Friday hearing was apparently to revise the prison term she is already serving at the Seoul Detention Center.

In 2017, shortly after the impeachment, Park was charged with abuse of power, bribery, leaking of government secrets, and coercion. A year later, in 2018, she was sentenced to 24 years, but that term was eventually increased to 25 years when new details of her case emerged.

Park, South Korea’s first female president, was accused of colluding with her friend Choi Soon-sil in taking tens of millions of dollars from chaebols, the country’s family-owned conglomerates. The high-profile graft scandal sparked massive protests across the country, with hundreds of thousands of protesters flooding streets to support or condemn Park.

The row also involved high-profile businesspeople, including Jay Y. Lee, vice chairman of Samsung Group. He was initially sentenced to five years in prison for bribery, but was released just before the 2018 Winter Olympics kicked off in South Korea. 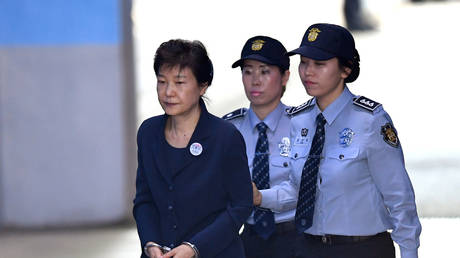 Rotting corpses chewed on by rats:...