South Korea has confined soldiers to their bases and begun tracing churchgoers as it attempts to slow down the spread of coronavirus. The country reimposed restrictions last weekend amid a surge of new cases.

The Korea Centers for Disease Control and Prevention (KCDC) registered 246 new coronavirus cases as of Monday midnight, two days after Seoul residents were ordered to adhere to stricter social distancing rules. The uptick follows nearly a week of three-digit increases in cases.

The Asian nation is seeking information on the daily activities of hundreds of members of the Sarang Jeil Church, which has purportedly been linked to nearly 400 coronavirus cases since the start of the pandemic. Ten members of the congregation are believed to have attended large anti-government rallies over the past two weeks in Seoul. The government wants the church congregation to self-quarantine and get tested for the virus, claiming they pose a high transmission risk.

Two new cases were also detected among military personnel, prompting authorities to order 461 soldiers into quarantine. South Korean troops have been confined to their bases, and they will not be allowed to leave or have visits for the rest of August.

The extreme measures come after a massive anti-government protest in downtown Seoul, despite efforts by city officials to ban rallies.

Less than 16,000 people in South Korea have tested positive for coronavirus, resulting in 306 deaths, since the start of the health crisis. 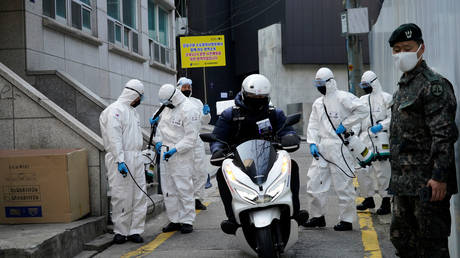