South Korea has warned of an impending health crisis, after continuing to report three-digit increases in new coronavirus cases. But the uptick has had little effect on the number of coronavirus-related deaths in the country.

The Korea Centers for Disease Control and Prevention reported that 288 people tested positive for the virus as of midnight on Wednesday. The Asian nation has seen a noticeable increase in new cases over the past week, which Seoul has blamed on large anti-government protests, as well as members of a church congregation who have been accused of transmitting the virus.

“This is a grave situation that could possibly lead to a nationwide pandemic,” Vice Health Minister Kim Gang-lip said during a press conference on Thursday. “Consider the Covid-19 pandemic now to be in full swing.”

In total, South Korea has documented 16,346 cases of Covid-19, with 307 deaths resulting from the pandemic. Despite the increase in new cases, the nation has reported only one new coronavirus-related death in the past 24 hours. Seven people have died from Covid-19 since the start of August.

The country’s health officials have argued that they need to increase contact tracing and take other measures in order to avoid a serious outbreak. South Korea had been hailed as a success story in fighting the virus, after it enacted aggressive contact tracing and testing early on in the pandemic.

The policies have not been without controversy, however. Massive anti-government protests were held in Seoul over the weekend, coinciding with the imposition of stricter social distancing guidelines.

South Korean troops were confined to their bases earlier this week, after two new coronavirus cases were detected among military personnel. 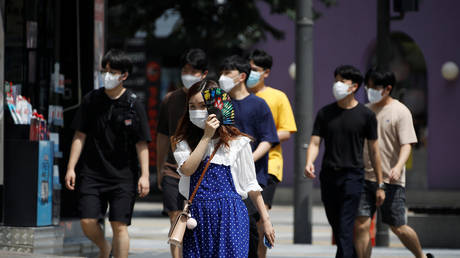 ‘He duped us’: Israeli settler lea...

‘Not keen on power’: Mali military...