As the coronavirus continues to wreak havoc in South America, it is the poorest who are worst affected. The pandemic has highlighted the societal problems that countries have been unable to eradicate.

At roughly 7:30am on July 6, a gasoline truck overturned on a perilous stretch of Colombia’s Caribbean highway known for accidents. In this part of the world, a vehicle accident itself is generally not newsworthy.

But times are different. With Covid-19 ravaging South America, we can begin to understand why ten people lost their lives when the truck’s cargo exploded, and around 50 are in a serious condition from their burns, after risking their lives to draw jerry cans of free gasoline for their vehicles or for resale.

The names of the people who perished and the unremarkable roadside town of Tasajera are sadly interchangeable with similar villages and communities in Bolivia, Ecuador, Peru or Venezuela, where people barely manage to feed their families and keep a roof over their heads.

The levels of poverty in a town such as Tasajera are extreme, and it’s a sad fact of life that part of the income for this largely Afro-Colombian community comes from looting crashed vehicles along this traffic blackspot.

The reality is that now, with Covid-19 sweeping through the region, the veneer of progress so often attached to South America’s war on poverty has been brushed aside. Instead, the world is seeing a part of the world severely lacking in provision for the neediest, an invisible population to many devoid of the most basic things such as clean water, sanitation, a stable income and healthcare.

At the time of writing, in the five countries mentioned, there have been an estimated 520,000 confirmed cases of Covid-19 and roughly 20,600 deaths according to World Health Organization figures.

These totals are, without doubt, on the low side given the lack of coherent data collection by the health authorities in each country and a distinct paucity of state presence in rural areas.

Brazil, not included in this estimation, has run away with the international headlines, but Peru is now fifth globally in terms of new cases and deaths.

Ecuador peaked early with the grim images of bodies strewn in the streets of Guayaquil, Colombia’s numbers have been creeping up steadily despite an early lockdown which only succeeded in delaying the inevitable, and Venezuela’s notoriously suspect data, coming from a long-collapsed healthcare system, cannot be trusted.

Bolivia is not exempt either, and while it has experienced relatively few deaths (1,476 by July 7) in comparison to its Andean neighbors, given the small population this is the equivalent of 126 fatalities per million people, a higher statistic even than Colombia, which as of the same day had recorded 4,210 deaths or 83 per million.

In short, for the Andean nations of South America, this isn’t even the second wave of cases; this is a delayed first wave and it is proving catastrophic. The numbers that are published each day are some way removed from the real number of cases.

How has this happened?

As governments in South America observed a “new” virus strafing parts of the first world and, indeed, their former colonial master of Spain, the only viable plan being put into action was that of a quarantine.

Initially, it seemed unreal that the virus could come this far. Peru locked down fast and deployed the military to the streets, Colombia began with a trial-run quarantine in Bogota and then the regions broke rank with President Ivan

Duque’s calls for an “intelligent isolation,” to minimize damage to the economy, and shut down their cities and towns.

The virus was seen as something ‘foreign’ which only affected the wealthy and international visitors, and at first this was the case. People with the economic means to travel returned home to South America bringing the virus with them and they found a region unprepared for what was on the horizon, coming through customs and immigration sections of airports bereft of medical checks, sanitation procedures and the know-how to deal with a pandemic.

With quarantines in place, the middle class and above have been able to remain at home, working remotely and with their children receiving virtual school classes. This isolation has been effective.

But what of the working classes? What about the millions of impoverished Venezuelan migrants spread across the region in search of work, driven from their homes by the harsh conditions there? What of the street vendors on the avenues in Bogota, Lima, La Paz and Quito?

Musicians, fruit salesmen, tradesmen and anyone involved in informal or day-to-day employment have all become beggars, dependent on meagre government handouts and goodwill from the middle and upper classes.

Members of this vulnerable population have scant access to healthcare, rarely possess bank accounts and have no savings. In these countries, there is no Plan B. The overarching idea was to subject the population to a quarantine and wait for the storm to pass.

Sergio Guzman, director of Colombia Risk Analysis, said,“I don’t think the government has put in place mechanisms to counteract a larger spike in contagion other than to bring in additional ventilators, enforce social distancing measures more strictly and limit the ability of people to travel between cities.”

And now,with severely contracting economies which are being pushed to their limits, the lauded achievements in poverty reduction over the last decade in Bolivia, Colombia, Ecuador and Peru are at serious risk of being wiped out completely.

“I think that the [Colombian] government is reticent to implement strict measures again such as the quarantine that local governments imposed early on during the pandemic, due to the pressure they put on the economy at the time,” said Guzman.

What has become clear is that the virus does not exclusively represent a medical or healthcare issue in South America.

It also provides insight into the continent’s wider problems.

We no longer need to understand just the virus, but also the societies and cultures in which it is flourishing. And presumably, as the tragedy continues to develop, governments across South America will be forced into investigating the causes of the rampant spread and addressing the suffering of communities in mourning, such as Tasajera in Colombia.

This is a long-term goal however. And while the rest of the world can send much needed aid packages and medical expertise, one fears that the insufficient healthcare systems, underfunded by years of budget cuts and corruption, will collapse, revealing the unpleasant truth of inequality inherent in South American society. 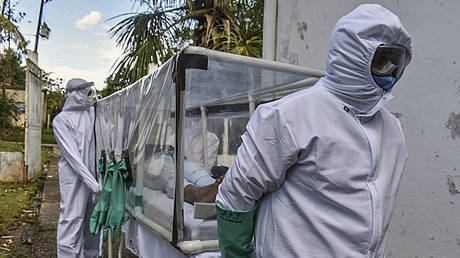