Sergey Khrushchev’s cause of death was a gunshot wound to the head, US police said. The 84-year-old son of Soviet leader Nikita Khrushchev passed away at his Rhode Island home last week.

“There were no immediate signs of outside foul play,” Major Todd Patalano of the Cranston Police Department said. He didn’t elaborate as to whether the death was being treated as an accident or a suicide, simply stating that the investigation was closed.

However, the younger Khrushchev’s widow, Valentina Golenko, who was the one to discover the body and call the police last Thursday, has refuted that this was the cause of death.

“Don’t repeat this gossip to me,” she told RIA-Novosti. “He died of old age, as the autopsy report says. He was sick for the last two years.”

Sergey Khrushchev was one of the five children of Nikita Khrushchev, the Soviet leader between 1953 and 1964, who led the country through the Caribbean Crisis, which took the USSR and US to the brink of a nuclear war.

Sergey Khrushchev used to be a rocket scientist in the Soviet Union and moved to the United States in 1991 to lecture at Brown University in Rhode Island. He and his wife were granted US citizenship eight years later.

His ashes will be buried in Moscow in October beside the grave of his father, who died in 1971, his widow told Russian media earlier. 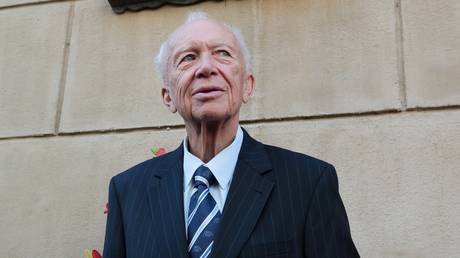