The prime minister of the Solomon Islands, Manasseh Sogavare, has doubled-down on his government’s decision to block Facebook pending new legislation, arguing that the site undermines social cohesion.

Sogavare told the nation’s parliament on Monday that the temporary ban, which has yet to be implemented, aims to “unite” the South Pacific nation by clamping down on online abuse and harassment.

“We have [a] duty to cultivate national unity and the happy coexistence of our people … [Facebook] is undermining efforts to unite this country,” the prime minister said. He blamed Facebook for enabling widespread cyberbullying, noting that people can be “defamed” and have their reputations destroyed by anonymous users.

He insisted that his government was trying to shield young people from “vile” language and was not motivated by a desire to curb open expression.

Once put in place, the ban will remain until legislation can be passed that would govern citizens’ interactions and behavior on the social media platform.

It’s still unclear how the temporary ban will be enforced, with the government still deciding whether it will use a firewall or utilize some other method to block Facebook in the country.

The move to blacklist the site, announced last week, has sparked condemnation from politicians and human rights groups. Opposition leader Matthew Wale dismissed Sogavare’s defense of the ban as “pathetic” and said the reasons given for the restriction are “not weighty enough.”

When unveiling the ban on November 17, Communication Minister Peter Shanel Agovaka cited “abusive language against ministers and the prime minister” and “defamation of character,” prompting accusations that the government was launching a brazen assault on freedom of speech.

Facebook has found itself in the crosshairs of Pacific Island governments before. In May 2018, Papua New Guinea implemented a one-month ban on the platform, over alleged concerns about fake user profiles.

More recently, in July, Samoa’s Prime Minister Tuilaepa Sailele Malielegaoi said he was mulling a Facebook ban as a result of defamatory comments made about him by the site’s users. 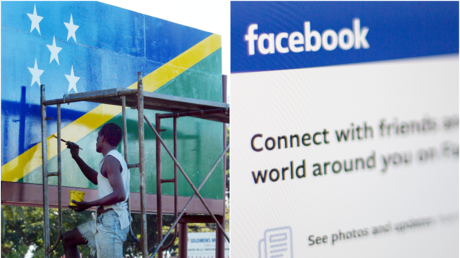