At least a dozen people have been killed in fighting between Pakistani and Indian forces at the disputed border in Kashmir, according to reports, in one of the deadliest encounters between the two militaries this year.

Indian officials reported the death of six civilians, three soldiers and one border guard following a day of heavy shelling between the neighboring states on Friday.

Meanwhile, Pakistan reports four civilian deaths but has not named any military fatalities, despite Indian officials claiming that they inflicted casualties among Pakistani security forces.

Both sides contend that the other initiated the shelling.

However, this version of events is disputed by Pakistan. According to a statement, Pakistan’s Foreign Office has summoned a senior Indian diplomat to answer for the death and destruction allegedly caused by the Indian shelling.

The statement added “that such senseless acts are in clear violation of the 2003 Ceasefire Understanding, and against all established humanitarian norms and professional military conduct.”

Syed Shahid Qadri, a government official in Pakistan-controlled Kashmir, said, “as usual they targeted civilian populations without any remorse.”

A video has emerged from an unofficial account purportedly showing the damage caused by Indian shelling on a village in Pakistan.

A number of Indian officials have posted on Twitter to condemn what they saw as Pakistani aggression, and to support their own armed forces. One Indian Ministry of Defense public relations officer slammed Pakistan for its “unprovoked” attack and showed a video purportedly of India’s retaliation.

Own retaliation to Pakistan initiated unprovoked ceasefire violations has inflicted heavy casualties on the enemy’s infrastructure and Morale! pic.twitter.com/0H5VJNFOD0

India and Pakistan each administer a share of the Kashmir region but claim the region in its entirety. Two wars have been fought over the region since gaining independence in 1947 from Britain.

A ceasefire was agreed in 2003 to be effective across the Line of Control between India and Pakistan, but is frequently violated, resulting in civilian deaths and skirmishes between the two militaries. 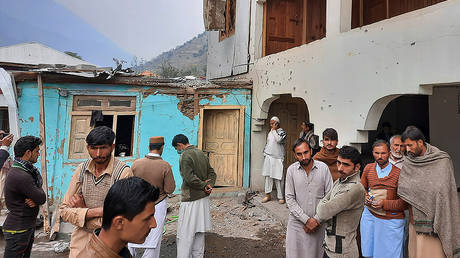